Wikipedia has a page called:
Impi

The Impi is a unique anti-cavalry unit of the Zulu civilization in Civilization VI: Rise and Fall. It replaces the Pikeman.

There's not much to dislike about the Impi: it's faster to train, cheaper to maintain, and gets better flanking and XP bonuses than the Pikeman it replaces. Its low

Gold maintenance costs allow the Zulu player to field an army of Impi very quickly and without risking a bankruptcy.

But there's more: the Impi becomes available around the same time as Mercenaries (if civic and tech development have been keeping a similar pace, of course), which allows Shaka to form Corps! Large groups of Impi are very difficult for opponents to repel unless they have a comparable force of melee units (which have a +5

Combat Strength bonus against Impi), and if you've been keeping up with your civic development and manage to capture a few cities, you'll have Impi Corps and Armies at your disposal long before anyone else. Start training Impi en masse as soon as you unlock them, then send them forth to show the world the Zulus' might!

While other civilizations may be inclined to train their unique unit's earlier form, this does not apply to the Zulus. The only drawback of the Impi are their class: anti-cavalry. Anti-cavalry units are generally weaker than other military units and often do not hold their own in offensive combat. So while Alexander may be training Warriors in the Ancient Era to rack up XP and

Promotions for his upcoming Hypaspists, the Zulus should not train the underwhelming Spearman or try to use them in early combat before they have any of their combat bonuses unlocked. Part of the reason that the Impi are so strong is because they are unlocked around the same time that the Zulus gain an influx of military strength through their brand new Corps. Without those Corps or their strong unique unit, the Zulus have no bonuses besides toward conquest besides their Ikanda, meaning you have no reason to put yourself at a disadvantage by forming an army of subpar units. Because the Zulus will have to hard-build their Impi to make the most of them, a Zulu player should spend their time in the first two eras heavily emphasizing infrastructure and finetuning your cities to prioritize

Science (for researching Military Tactics and unlocking the Impi),

Culture (for completing the development of Mercenaries), and

Production to ensure you can produce enough Impi fast enough to conquer your neighbors and begin snowballing.

In addition to building

Districts, the Zulus should also pay attention to the various boosts to training anti-cavalry units. These include:

Production city with an Ikanda and all of these bonuses, the Zulus will be able to quickly train a highly-capable army to trample their opponents.

The Impi's increased flanking bonus means they benefit more from flanking, but they are not better at providing such bonuses for other units. For example, an Impi and a friendly Swordsman both flank an enemy unit; the Impi will receive a +4

The powerful warrior regiments of the Zulu were already a formidable force when the ambitious Shaka taught them new techniques: combining the iklwa (a short, stabbing spear with a broader blade than a throwing spear) and the ishlangu (a large, oval shield with cowhide layered on top). They trained to form shield walls, both to blunt projectiles and to hide their true numbers, and attack with a “buffalo horns” formation—greener troops would sweep out and around to pin the enemy’s flanks (the horns), while a more experienced center would slam into the pinned enemy (the rest of the buffalo).

The impi training regimes under Shaka were nothing less than brutal, but harsh conditioning led to tightly bonded, well-disciplined soldiers able to carry out complex formations with ease. The impi became a highly mobile force, nigh-unstoppable against anything short of repeating rifles and high explosives. 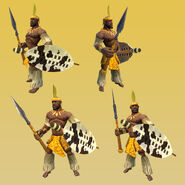 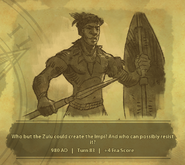 Historic Moment for building the Impi