The Incan people (or Inca(s)) represent a DLC civilization for Civilization V that was released in December 2010 along with the Spanish and the Conquest of the New World scenario.

* The name "Uturuncu" appears twice in the XML files, thereby giving Incan players a chance to recruit two different spies with this name.

The main strength of the Inca lies in their ability to use the hill terrain feature much more efficiently than any other civilization. Roads and Railroads cost no maintenance in hills, and half anywhere else. This will increase your GPT from inland

City Connections significantly. To further their effectiveness in hills, their unique improvement, the Terrace Farm, allows them to extract

Food from hills without having to find one with access to fresh water. Look for opportunities to settle in hilly areas to make the most of these advantages; also, look for mountains and try to settle near them (as the Terrace Farm's effect is even greater near mountains). You will end up with cities strong in both

Their other strength is their exceptional mobility in hills, which may confer them an important advantage if used properly. Use their unique unit, the Slinger, to harass your foes without fear of repercussions.

The largest Pre-Columbian empire in the Americas, the Incan Empire stretched from Peru to Chile along the Andes Mountains. This grand empire had humble beginnings in one small kingdom, but grew to dominate the whole of "civilized" South America. While the empire only lasted for one brief century, it did much to unify the people and culture of the different tribes living on the mountain tops. Despite the Inca's near and complete annihilation, many artifacts and physical structures still stand, such as the famed Machu Picchu, a testament of the power once wielded by the Incan kings.

The empire was centered along the Andean mountain ranges, and encompassed areas which include parts of present-day Argentina, Ecuador, Peru, Chile, Bolivia, and Colombia. The climate and geography were mountainous, but early on the Incas perfected the art of terrace farming and easily lived among the ridges. Fertile valleys nestled between the mountain peaks gave the Incas plenty of spaces to live and grow.

Early History: The Kingdom of Cusco[]

Before it was a mighty empire, the Incas hailed from the small Kingdom of Cusco, situated in western Peru. Under the leadership of Pachacuti, the ninth Sapa Inca, Cusco embarked upon a campaign to subjugate the surrounding tribes under one banner. Using both military conquests and peaceful assimilations, Pachacuti and his son Tupac laid the foundation for the Tahuantinsuyu Empire. The appellation was a literal naming of the empire, signifying its creation from four separate provinces - Chinchasuyu in the northwest, Antisuyu in the northeast, Contisuyu to the southwest, and Collasuyu to the southeast.

Pachacuti set up a new system of government in order to keep his acquisitions in order. Children of the ruling families were made to relocate to Cusco (the capital) and learn from the Incas directly, becoming indoctrinated into their culture and way of life. Once they were older, the children were returned to their original provinces in the empire, helping to spread the Incan culture.

After Pachacuti's death in 1471, his son Tupac Inca Yupanqui began new conquests in the north. At this point in time, the Incas only had one main rival left along the western shores, the Chimor tribe. Tupac quickly dispatched them and added their holdings to the growing empire.

Tupac's son Huayna Capac later added a few additional pieces of present-day Ecuador to the empire, but his southern expansion was halted at the Battle of the Maule. There the Mapuche tribes stopped the Incas in their tracks. This wasn't a complete loss for the Incas since most of the land in this area of the empire was predominately desert wasteland, and the majority of the population remained in the Andes.

In 1526, the Inca's domination of the land began its downward spiral. Spanish conquistador Francisco Pizarro reached the Incan territory as he explored south from Panama, and immediately petitioned the crown for permission to invade - he believed fervently that the land was ripe with treasure.

He returned with a small force in 1532 to find the empire ready for the taking. Huayna's two sons, Huascar and Atahualpa, were engaged in a civil war over control of the territories, and the introduction of smallpox had wreaked considerable havoc among its populace. Pizarro's force (168 men, 1 cannon, and 27 horses) were no match for the Inca in numbers, but their superior technology and military tactics saw them through in the end.

Pizarro's first battle, the Battle of Puná, occurred later that year near present-day Guayaquil, Ecuador, which he handily won. One of his men, Hernando de Soto, was sent further inland to explore as Pizarro founded a new city in the area, Piura. De Soto encountered the triumphant Atahualpa and returned to Pizarro with an invitation to meet. The Spaniards demanded that the Incas accept Charles I of Spain as their emperor and convert immediately to Christianity. Perhaps due to a language barrier or poor communication skills in general, Atahualpa didn't fully grasp the exact message of the meeting and sent further communications demanding more explanation. Frustrated and annoyed, instead of finding a better translator the Spanish attacked Atahualpa's camp and took the leader as hostage.

The Incan King offered Pizarro a massive amount of gold and silver for his release, which he promptly accepted. Pizarro however didn't keep his end of the bargain and refused to release Atahualpa to the Incas. During this time, Huascar was assassinated and Pizarro used this to his advantage - claiming that Atahualpa was behind the dirty deed. At a shady trial run by the Spanish, Atahualpa was sentenced to death in August 1533.

The End of an Empire[]

With both Atahualpa and Huascar out of the picture, the Spanish placed their younger brother Manco in charge, who dutifully cooperated with them for the time being. Manco, once secure in his own power base, attempted to take back his empire with the capture of Cusco in 1536, but he was no match for the Spanish invaders. He and his court fled to the mountains of Peru, where they continued to rule for the next 36 years. However, in 1572 the last Incan stronghold fell, and Manco's son and current king, Tupac Amaru was executed.

All the Incan royalty dead, the new Spanish rulers brutally oppressed the native people and attempted to strip them of their culture, religion, and traditions. Each Incan family was required to send a family member to work in the Spanish gold and silver mines, and replace them immediately upon the worker's death, which happened roughly every one to two years due to poor working conditions. Smallpox continued to spread rapidly through the remains of the empire, claiming somewhere between 60% and 90% of the population. Typhus, influenza, diphtheria, and measles did the rest - by 1618 almost all traces of the Incan culture were lost. All that is left now of their once glorious civilization is a smattering of scattered tribes and stone outcroppings, relics of a distant past.

The Inca used a system of knotted and dyed strings to store accounting information.

The Incas believed the coca plant was both sacred and magical, and its leaves were used in numerous religious rituals.

The highest permanent Incan settlement found so far is located at roughly 17,400 ft above sea level. 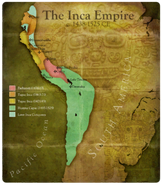