Food for each adjacent Terrace Farm.

Approximately 10 million at height of power.

The Incan people (or Inca(s)) represent a civilization in Civilization VI: Gathering Storm. Their colors are brown and yellow, and they are led by Pachacuti.

The Incas' civilization ability is Mit'a, which enables their citizens to work Mountain tiles (each of which provides +2

Food for every adjacent Terrace Farm). Their unique unit is the Warak'aq (which replaces the Skirmisher), and their unique tile improvement is the Terrace Farm.

The Incan empire under Pachacuti returns to Civilization VI with pretty much the same concept: an isolationist civilization who prefers to go tall with Terrace Farms and hiding itself behind a bastion of sprawling mountain ranges. With a massive

Trade Routes, Mountains and Terrace Farms, Inca can sprint quickly towards a Scientific or a Cultural Victory.

The Incas thrive near mountains and mountain ranges. In the early game, spend Builder charges to harvest tiles and construct Terrace Farm improvements to catapult

Eurekas, such as a Woods tile for Mass Production). This allows the Incas to bring basic infrastructural improvements online much faster than any other civilization. Settlers can also be hard-produced (the loss of

Food yields from Terrace Farm), making expansion straightforward. Use the Qhapaq Ñan to traverse and settle near Mountains, Hills and Rivers, while exploring the surrounding area for other potential settlement sites. Domestic

Populations. Make sure to diligently improve and trade for luxury resources to keep up with the

Amenities requirement of your population.

Every Hills tile is useful for the Incas, leaving flatland tiles suitable for district and wonder placement. Along with their impressive city

Production, harvested resources can be utilized to construct the Apadana, Colosseum, Oracle, and Temple of Artemis wonders to further their early-game edge. While the Incas lack inherent

Culture advantages, they can quickly construct Campus and Theater Square districts as well as their respective district buildings. Their

Population advantage can also be used to work these districts and maintain steady, if not impressive,

Culture outputs throughout the game. Similarly, City Projects can be conducted to obtain their relevant yields and Great People.

Incan cities will rarely run out of

Food yields in the mid-game. To a lesser extent, Qhapaq Ñan can also be used offensively to quickly deploy armies across mountain ranges. Keep in mind that Qhapaq Ñan outside Incan territory can be freely used by anyone, even in peace.

The Incas' ability to raise large and productive cities allows them to pursue a Science Victory with ease. Surrounded by mountains, Incan interests should be difficult to stop for any rival civilization.

The Inca Empire was one of the last, largest, and powerful indigenous American nations. Its name in Quechua was “Tawantin Suyu”: The Four United Regions. It encompassed people speaking a variety of languages, had a strong central administrative body centered on the court, sophisticated public infrastructure and roads maintained by a system of compulsory labor, taxation and food distribution, and it did all of these without widespread use of written records, the wheel, or animal labor. As such, it presents students of history with a fascinating counterfactual case for evaluating claims linking political systems and technologies. In short, they're perfect to include in a game where you can build the Pyramids of Giza in Washington.

The Inca home territory was the Kingdom of Cusco, frequently described as a city-state. There are a series of origin myths for Cusco, most featuring the legendary founder Maco Capac or the sun god, Inti. In 1438, under the reign of Pachacuti, the Inca began a systematic process of diplomatic and military expansion, absorbing or conquering nearby peoples, including the coastal Chimor and the Aymara in modern Bolivia. Pachacuti's conquests gained the Inca a substantial portion of the Andes mountains, and his heirs continued to add territory and population through conquest and diplomacy.

As the Quechua name suggests, the Inca divided their empire into four parts, with Cusco at the junction of all four points. The Inca used a codified system of mandatory labor called the mit'a, where able-bodied adults could be required to commit to agriculture or the military in exchange for the protection of the state and access to the public goods. The Inca built and maintained a massive network of excellent roads and footbridges through the rough mountain terrain. Surplus crops were housed in public storehouses in event of disaster.

All planning for the empire was done centrally, and a system of reciprocal responsibility between the ruler and his people governed the distribution of resources among the people. To this system of reciprocal responsibility, the Sapa Inca would add family ties through intermarriage of his family members with those of the regional nobles and ruling families of conquered people, in order to create an interlaced system of both familial and customary obligations with his vassals. Inspectors linked to the court of the Sapa Inca had responsibility to see the administration of customs, the maintenance of the empire, and the enforcement of the mit'a.

The Inca were skilled astronomers, architects, and surveyors. An ingenious mnemonic system of knotted cords called the quipu was used to convey information between the capital and the distant lands and store historical records. Even textiles could be used as ideographic or mnemonic purposes. Incan architectural masonry combined non-standard stones in tight-fitting, mortar-less structures that awed European observers. Terrace farms of considerable engineering sophistication turned otherwise-unplantable hillsides into productive, arable land.

Cloth was particularly prized by the Inca, and textiles were given as gifts. Textile work could be elaborately woven and brightly colored. Clothing served as both social class symbol and served as a form of conspicuous consumption among the upper classes. Cotton was common, as was the wool from the llama and alpaca, but only the Inca nobility could wear wool from the vicuna and the guanaco. The Sapa Inca never wore the same clothing twice.

In warfare, the Inca used their extensive public stores to supply armies, publically maintained armories to equip their troops, and road networks to move troops quickly from end to end of their empire. As military conscription was a prerogative of the state, the Inca could field much larger forces than their indigenous rivals in most cases. However, the Inca's advance to the south was checked by the Mapuche at the Maule River. The Inca honored the Mapuche by calling them the “purum awqa”—“the savage enemy.”

The Inca were brought down through a combination of internal strife and war with the Spanish conquistador Francisco Pizarro. Under the reign of Sapa Inca Huayna Capac, the Inca had stretched their empire to a corner of what is today Colombia. The expansion was contested by the indigenous Americans, and the succession to Sapa Inca was hotly disputed as well. A succession war between sons of the recently-deceased Huayna Capac had broken out, and old world diseases such as smallpox were ravaging the population. Pizarro inserted his meager but well-armed force into this conflict and proceeded to completely destabilize the Inca Empire.

Pizarro captured one of the pretenders to the throne, Atahualpa, through deception and violating a flag of truce on a flimsy pretext. The Inca offered to ransom Atahualpa for enough gold to fill his cell, and twice that much again in silver. Pizarro accepted the offer, then reneged on his agreement after the ransom was paid. Huascar, the other pretender, was assassinated during this time, and Pizarro declared that Atahualpa was responsible for the crime, then had Atahualpa summarily executed.

Having worked meanwhile to divide the Inca nobility from the ruling house, the Spanish then put a puppet Inca on the throne of what was essentially a vassal state. The mit'a was expanded under Spanish control to include work in the state silver mines at Potosi, the traditional terrace farming methods were abolished, and the population still suffered the ravages of introduced diseases. The last Inca holdouts were conquered in 1572 when the last Inca ruler, Tupac Amaru, was captured and executed. The Inca Empire was at an end.

The Inca Empire's organization and technologies have undergone renewed study and interest in the present day. The allyu system of reciprocal obligation is studied by political scientists. Intricacies of the vertical archipelago system of agriculture suggest sustainable ways to grow food crops for the future. It may be that the greatest treasure the Inca convey to future ages is not in gold or silver, but in a better way to raise a potato. 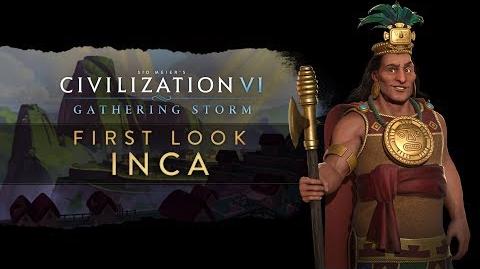 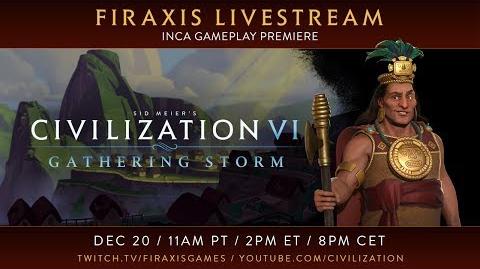 Retrieved from "https://civilization.fandom.com/wiki/Incan_(Civ6)?oldid=236247"
Community content is available under CC-BY-SA unless otherwise noted.