Melee unit of the Modern Era


The Infantry is a Modern Era melee unit in Civilization VI. It upgrades from the Line Infantry (or its replacements).

In the Gathering Storm expansion, the Infantry requires 1

Oil to train and 1

Oil per turn to maintain.

In vanilla Civilization VI and Rise and Fall, the Infantry is the first melee unit since the Warrior that doesn't require resources to train. That may not seem like much, but when you have trouble securing a certain resource, you're forced procure it through deals (often at your disadvantage), and are constantly under the threat of your units suddenly becoming weaker and being unable to heal when their resource runs out.

But besides this, the Infantry is a very powerful unit on its own. Armed with modern rifles, and trained to take cover and use loose formations (which minimizes damage taken from explosions), it is finally able to stand its ground against the terrifying Cavalry, and against most modern horrors technology spews. It is a must-have for every military-oriented civilization, and also for those that are under threat of invasion in modern times.

As the first half of the 20th century moved forward, two of the most destructive wars in civilization, marked by remarkable advancements in the technology of killing each other, occurred. Through it all, the infantryman marched into battle, grimly facing every horror – machine guns, mines, gas, strafing and bombing from the air, and all the rest out of Pandora’s Box – that the greatest scientists of the age could invent. The task of the foot soldiers hadn’t changed much since the spearmen and swordsmen of antiquity: take and/or hold whatever ground the generals decided was important. But the infantryman’s own bag of tricks became ever more lethal, with magazine-fed rifles, automatic pistols, submachine guns, flamethrowers, grenades and all sorts of other clever devices. Since armor didn’t stop such, it was discarded for mobility and camouflage. By the end of WW2, infantry could hold their own against most any threat ... provided enough of them survived. 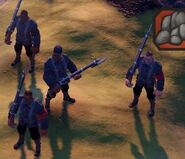 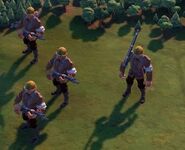 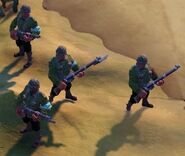 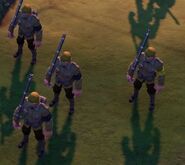