Even as a civilization collapses and dynasties crumble, great artists still produce great art … albeit, often in obscurity. The end of the Joseon Kingdom gave birth to a number of preeminent artists: Ahn Gyeon, Shin Saimdang, Master Jeong Seon, and Kim Hong-do. But the most legendary might have been Jang Seung-eop – better known by his pen name “Owon” – whose powerful brush strokes revolutionized Korean art … “a saint who got drunk on the sensation of painting.”

Born in 1843 AD, Jang’s parents died during his childhood; the orphan wandered about before being taken into the Hanyang (Seoul) household of the aristocrat Yi Ung-heon. The teen Jang was illiterate, having no schooling, but once he took a brush in hand his skill at painting became evident. He was able, it is said, to dash off masterful drawings with one stroke of the brush; likely an exaggeration, but he does seem to have been able to paint with alacrity and skill. His reputation spread, and his exquisite and delicate paintings of landscapes, portraits and especially scenes of daily life in the capital were much in demand. Owon painted to make money; he sold his works mostly to the newly empowered merchant class.

Unlike most artists who make a preliminary sketch or draft, Jang could apply ink to silk or paper without hesitation to create masterworks. And he found his muse in alcohol and women, of which he was inordinately fond. Legend has it that he frequented banquets given by wealthy merchants, churning out paintings on the spot while drinking wine served to him by fawning women. It is uncertain where (he tended to wander about) or how he died, but Jang disappeared from history in 1897 at the age of 55. 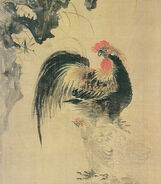