Melee unit of the Renaissance Era

Ottoman unique Renaissance Era unit that replaces the Musketman. Starts with a free

Promotion. Stronger and cheaper than the Musketman. To train a Janissary, a city must have a population of at least 2. If a city is founded by the Ottomans and trains a Janissary it loses a population.

Wikipedia has a page called:
Janissaries

The Janissary is a unique melee unit of the Ottoman civilization (when led by Suleiman) in Civilization VI: Gathering Storm. It replaces the Musketman and requires 10

The Janissary is one of the most fearsome unique melee units in the game, thanks to its cheap cost, good

The most outstanding feature of this unit is its appealing price tag. Standing at only half the cost of a normal Musketman, the Janissary is the cheapest unique unit in the game, if you only consider the cost ratio between the unit itself and the standard counterpart it replaces, similar to how the Grand Bazaar is also the cheapest unique building in the game. This 50% discount makes the Janissary so cheap that it becomes an anomaly, when it actually costs more to train a Man-At-Arms, the predecessor, than a Janissary. Therefore, for Suleiman, you should never train Men-At-Arms to take full advantage of your unique unit (more on this down below). Secondly, despite its cheap cost, the Janissary even has a

Combat Strength edge over the Musketman, and a free

Promotion when trained. On average, 5

Combat Strength difference results in 6-7 extra damage per attack, and the free

Promotion applies even when an existing unit upgrades into a Janissary (in that case, the experience bar will be automatically filled and the newly created Janissary will have access to one next

Promotion, if it already has some).

However, all of this power comes at a cost. Similar to training Settlers, any city founded by the Ottomans will lose 1

Population whenever they train a Janissary. This can be quite detrimental, but bypassing it is simple. There are two major options to minimize your losses when you want to train this unit:

The Ottoman Sultans were entitled to extract a fifth of the value of their territory. Often this took the form of levies of labor or manpower. Christian communities in the Balkans were compelled to provide boys to the Janissaries. The boys were taken from their families and communities, converted to Islam, and then raised in the strict discipline of the Janissary corps.

Janissaries were originally forbidden to marry (this stricture was relaxed later) or engage in trade, and swore loyalty to the Sultan himself. The Janissaries had their own distinctive marching bands—the mehter—which influenced European military marches in successive centuries. They were well-paid, and given the special attention of the Sultan, who would appear once a year among his Janissaries to draw his pay. The Janissary corps was strongly meritocratic, and a successful Janissary could retire with a pension and considerable cultural prestige. The Janissaries may have been the first infantry force to be predominately equipped with muskets. They wore uniforms at a time when the practice was still uncommon, with a distinctive high white hat with trailing flap.

The Janissaries became one of the most politically-powerful factions within the Ottoman Empire and comparisons to the Praetorian Guard of Rome are apt. However, they resisted most of the efforts to reform their organization, bringing them into conflict with later Sultans. In 1826, the Janissary corps mutinied in response to European-style infantry reforms. Sultan Mahmud II turned cannons on their barracks and executed any Janissary who survived the bombardment. This event was termed the “Auspicious Incident.”

The Janissaries were pivotal to the military power and successes of the Ottoman Empire, and they influenced the development of musket armies in Europe during the transition to the age of gunpowder. Their organization and history provides insight into the organization of the Ottoman world. Even their enemies respected their discipline and admired their panache. 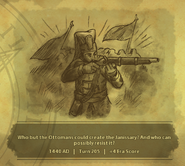 Historic Moment for building the Janissary