King of the Khmer Empire

Leader bonus - Monasteries of the King

Housing if built next to a River, and trigger a Culture Bomb when built, claiming surrounding tiles.

Leader agenda - An End to Suffering

Likes civilizations with many Holy Sites and a high average city

Population. Dislikes civilizations lacking in either of these areas.


"Provide for your people. To do less is to be less."

Jayavarman VII (c. 1123 – c. 1218) was king of the Khmer empire from approximately 1181 until his death, renowned for repelling an invasion by, and later conquering, the kingdom of Champa, as well as significantly helping spread Buddhism in Cambodia. He leads the Khmer in Civilization VI.

Jayavarman's Khmer Empire features populous cities of devout Buddhists, especially those along rivers where all their abilities can come into play.

Wise Jayavarman, seventh to hold the name, the Khmer admire your dedication to their well-being. Your command of the land's fresh waters lets you feed your hungry people, just as it brings you ever closer to Heaven. Go forth, divine architect! Build an empire that approaches perfection—and may your enemies find their end beneath your mighty war elephants.

Jayavarman VII's unique agenda is An End to Suffering. He likes civilizations that have Holy Sites and a high average city

Population, and dislikes civs that are lacking in either of these areas.

His leader ability is Monasteries of the King. His Holy Sites earn a major adjacency bonus from Rivers, gain

Housing if built on a River, grant

Food equal to their adjacency bonuses, and trigger Culture Bombs.

Housing. These cities will then bloom when the Khmer reach the late Classical era when both Aqueducts and their unique Prasat temples come online. If neighbors crowd them in, they can use their Domrey unique unit to besiege a few nearby cities, probably grabbing additional sites along rivers. With a populous empire based around the Buddhist faith, Jayavarman can pursue any victory type moving forward into the later game.

Jayavarman VII is voiced by Heng Sarorn. He speaks royal Khmer and refers to the player as "Preah Ang," which can be translated as "God-King." The Khmer only used their title to refer to their kings, and Jayavarman's use of it even when declaring war and defeated means he thinks of the player as his equal.

Delegation: Our delegation brings a-ping, a fried dish. Best to eat the legs before you consume the rest of the tarantula.

Accepts Delegation from Player: We received your delegation in our capital. The Khmer appreciate your gift.

Rejects Delegation from Player: We cannot accept. The Khmer do not need strange gifts from foreign lands.

Rejects Player's Declaration of Friendship: I must refuse.

Requests Declaration of Friendship: Heaven smiles upon you - as do the Khmer. The world should know of our friendship. Might we declare it?

Trade Deal Accepted: Yes. It is good for the Khmer.

Denounced by Player: You defy Heaven with your harsh words. It must be a familiar feeling!

Denounces Player: You must know how to live a divine life—how else could you teach your people to do the opposite?

Invitation to City: You should travel to our capital. Behold our prasat to understand what the Khmer hold dear.

He oversaw a truly staggering amount of infrastructure building and rival kingdom-smashing during what many consider the golden age of the Khmer. Meet the people's king, Jayavarman VII.

Born in 1123 CE and the son of King Dharanindravarman II, much of that we know about King Jayavarman VII comes from inscriptions on the temple at Rajavihara (now Ta Prohm) as well as at Phimeanakas. These inscriptions offer a rich, yet still incomplete history of this beloved king.

However, what we do know is that when King Jayavarman VII's reign began during a period of crisis for the Khmer. To the north, their control over distant vassal kingdoms was eroding away, while the Mongols (and later the Ming Dynasty) were expanding their trade interests throughout Southeast Asia (trade of raw materials being how the Khmer remained fabulously wealthy). To the South, revolution was brewing in Malyang. And looking east, the Empire was entering year 14 of their war with the Champa (occupants of what is now central Vietnam).

Jayavarman VII would spend his 20s and 30s at war, supporting King Yasovarman II (a relative of unknown origin) in war against the Cham. An interesting side note: according to legend, King Yasovarman II was attacked by the frankly horrifying divine being Rahu (a floating head which ate suns during eclipses), only to be saved by one of Jayavarman VII's sons.

By 1178, the Cham, under King Jaya Indravarman IV, would invade the Khmer Empire twice, destroying the capital at Yaśodharapura on the second attempt and sacking the temple city of Angkor Wat.

Now it's unclear why, but around this time, Jayavarman VII was said to be living in Vijaya, which is in central Champa (given the history of the period, he may have just been a guest). He would march west and regain control of Khmer—with Cham forces in tow.

This is according to Champa inscriptions, by the way, which are not wholly clear on why these Cham forces would ally themselves with a foreigner. Or why, ten years after he took the throne, a Cham prince would help King Jayavarman seize the Champa capital of Vijaya and assist in the capture of King Indravarman?

By 1181, with a little diplomacy (and some help from his Cham allies), Jayavarman VII had repelled the Cham invaders. Once hostilities died down, he crowned himself king. He would, of course, celebrate the start of his reign by establishing a new capital at Angkor Thom.

At this point, you would expect your newly minted monarch to begin his period of land-grabbing and expansion. And while King Jayavarman would keep up the conflict with Champa, going as far as to install a puppet king in 1190, his reign was notable for turning inward, beginning an unprecedented period of construction and infrastructure building.

King Jayavarman VII saw himself as a warrior for his subjects, and not just one who rode into battle to fight foreign foes (although he did a bit of that, too). In a break with previous Hindu-Khmer kings, which centered the throne in state affairs, King Jayavarman adopted a Buddhist mode of thinking, one which centered the population in the state.

Mahayana Buddhism is believed to meld both compassion (personified by the Bodhisattva Lokesvara) and wisdom (Prajnaparamita), and it was King Jayavarman's aim to create a place of safety and paradise for his subjects.

He would actually make Mahayana Buddhism the state religion, breaking with 400 years of Khmer Hinduism. And to mark the occasion, he would initiate the construction of numerous temples, 102 hospitals, stone-paved highways out of reach of flood waters, the 54 towers at Bayon, and extensive irrigation projects. Another documented project was the construction of rest houses every 15 km throughout the kingdom.

Additionally, the nearly 40 years of his rule would also be marked for its tolerance; while endorsing Buddhism, King Jayavarman VII kept a role for Brahman priests within the palace, a role that continues today in Cambodian kingship.

We don't have many details about the final years of King Jayavarman VII's life, or even the year in which he died (but it was somewhere between 1215 and 1220). However, after his death, he would be given the name Mahaparamasaugata as a tribute to his greatness. As for the Khmer Empire? It would fall into what looks like a precipitous decline. By 1222, the Cham were able to retake the land Jayavarman VII had conquered during his reign.

Still, it's hard to undo all of that temple-building and goodwill-spreading. King Jayavarman VII and his people-driven reign remains fondly remembered in Cambodia, where he figured prominently in state-produced education materials well into the 20th century.

Jayavarman VII on the loading screen (in Gathering Storm) 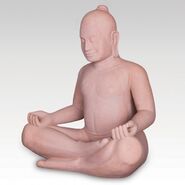