Combat Strength when in a formation.

The Jong is a unique naval ranged unit of the Indonesian civilization in Civilization VI. It replaces the Frigate and is unlocked with Mercenaries.

One of the most feared naval units in the game, the Jong can be deadly under adept leadership. The strength of this unit lies not in its statistics, but in its timing being extremely favored by the militaristic landscape of the game.

Gitarja's leader ability allows the Jong to be ready to take on the world in the same turn it is unlocked. She can buy naval units with

Faith, so right before Mercenaries is unlocked, Quadriremes can be bought en masse at 240

Faith each and then upgraded into Jong using

Gold. With the Professional Army policy card (which is also available with Mercenaries), these Quadriremes can be upgraded cheaply at only 140

Gold each. Since Gitarja is the only one who can buy naval units with

Faith, this tactic is specific to Indonesia. If she could not buy Quadriremes with

Faith, there's no chance she could save enough

Gold in just two eras to buy and upgrade a meaningful number of Quadriremes, so her ability is absolutely crucial in pulling off this trick by dividing the burden for both types of currency. Your job is to save up as much

Faith as possible when approaching Mercenaries. If you have to hard-build Jong, you aren't playing them to their full potential and will miss the opportunity for one of the most powerful unique unit pushes in the game.

Unlike the Frigate it replaces, which is unlocked with a Renaissance-era technology, the Jong is unlocked with a Medieval-era civic. Obviously the Jong is not the only unique unit that is unlocked earlier than the standard version, but it comes at a time that allows it to wrest control of the sea without any resistance. In the Medieval Era, there are only two standard naval units: Galleys, which are obsolete and pose no threat to Jong; and Quadriremes, which are of limited use because of their high cost and short

Range. The timing of the Jong is at such a brilliant spot that it's guaranteed to dominate the entire ocean if you play your cards correctly. The standard Frigate is unlocked a whole era after the Jong, so unless your opponents beeline Square Rigging (which is very uncommon for any civilization except the Dutch), you will have plenty of time to conquer your neighbors. And remember, no one else has the ability to instantly create a huge armada of ships like you, so even when their Frigate is unlocked, you still always have the numbers and

Promotion advantage. This also means that unlike Frigates, Jong benefit from Classical and Medieval

Great Admirals, but since you are a naval civilization who is most likely playing on a water map, Harbors should be present in most, if not all of your cities. And besides, you're Indonesia, your civilization ability incentivizes you to put your cities along the coastline anyway.

The most incredible thing about the Jong is that, in Gathering Storm, Frigates require

Niter while Jong do not, so you can crank out Jong after Jong based on how much

Faith you have, and there's no downtime waiting to accumulate strategic resources. It's this utterly unmatched speed from the point it becomes available to when a huge armada of Jong sails to your neighbor's doorstep that makes it so fearsome, and there isn't much enemies can do to stop the advance of your units for quite a long time.

Even if the Jong had no other bonuses besides its brilliant timing, it would still be a top tier unique unit, but it does gain 5

Combat Strength whenever it's in a formation. As a naval unit, it can be in formation with a land military unit, a support unit, or a civilian unit, all of which provide the same bonus to the Jong; however, the bonus is not cumulative if a Jong is in formation with more than one unit (e.g. a

Great Admiral and a land unit). The Jong is innately faster than the Frigate with 5

Movement, which is almost guaranteed to be at least 6

Movement when it is unlocked, since Mathematics is a Classical tech. A Jong in formation and next to a

Ranged Strength, stronger than a Field Cannon unlocked 2 eras later. It can kill Crossbowmen and Catapults in a single shot, so land units with ranged attacks are also not a problem.

Movement. The key advantage of this bonus is the speed at which you can escort your

Great Admiral and your land army with you on your naval conquest. Not only these units provide additional

Combat Strength for your Jong, they can help deal the last blow to cities that settle two tiles inland where your Jong can reach but your naval melee units cannot. Remember, in order to use this ability, you need to move your Jong, not the unit in formation; otherwise, the formation can only move to the maximum ability of the embarked unit and then breaks. A unit that has already used up its

Movement this turn can still move if it is in formation with a Jong, so this ability allows the Jong to immediately transport land units which are out of

Movement due to embarkation. Later in the game, while heavily-promoted Jong can go on and become Battleships, new and inexperienced Jong can be dedicated to transportation purposes only, as a few Jong can help embarked units traverse long distance within a turn. This is how to do it: put a unit in formation with a Jong, move the formation to the desired direction; when that Jong has 1

Movement left, exit formation and move the next Jong in and attach it with the embarked unit. Each Jong has 6

Movement with Mathematics, and with enough Jong and each Jong in its correctly planned location to receive the embarked unit from the previous one, you can move a unit through an open sea strait in a turn. Since this has an unlimited rinse-and-repeat potential, the more Jong you dedicate to this purpose, the longer distance your embarked unit can move in one turn. Although the Great Lighthouse is still an underwhelming and unnecessary Wonder to build yourself, if you happen to capture it during your conquest, it can help you tremendously.

Overall, considering the emphatical importance of this unit, it is advisable you invest your resources in the early game to generate as much

Culture as possible and beeline straight for Mercenaries after Political Philosophy. Prioritize building the Monument in every new settlement and pick up Choral Music as the Follower Belief for your Religion. The five civics you need after Political Philosophy before reaching Mercenaries are Games and Recreation, Defensive Tactics, Feudalism, Military Tradition and Military Training. While there is not much you can do about Games and Recreation and Defensive Tactics, boosting Feudalism and Military Tradition is quite easy. If your empire has good early

Production, you can build one Encampment to boost Military Training as well. To boost Mercenaries, you can just build cheap units like Scouts or Swordsmen. The

Meanwhile, on the tech tree, head for Cartography, as you will need to research it before the Jong can enter Ocean tiles! Also, this tech unlocks Caravels, which can help with capturing coastal cities. Don't forget that having a next-generation ship doesn't automatically mean that it can move freely in the ocean, and it being unlocked with a civic instead of the normal tech development also means that it is fully possible the Indonesians will get access to it before they've advanced sufficiently in the tech tree to unlock its full potential. Without Cartography, the Jong is constrained to Coast tiles, and its movement may get easily blocked by lesser ships or national borders. Alternatively, if you can snag and activate the Great Admiral Leif Erikson you can hold off on researching Cartography as Erikson's ability grant access to ocean tiles with +1 Sight to boot.

If you wish to dominate the high seas, confront the enemy with overwhelming force. This was the philosophy behind the massive jong ships, the schooner of the Majapahit. This vessel allowed the Empire to control Javanese waters through a combination of size and strength.

The Majapahit sailing vessels differentiated themselves from Chinese junks with the addition of a second rudder, which made the 600 ton jong fast yet easy to control. This wasn't the only extra maneuverability option for the jong; if the winds were low, a row of oarsmen could move the schooner beyond the range of enemy fire or around seaborne obstacles.

While primarily used as merchant ships, jongs also served as military transports. All of that weight wasn't just for show: the addition of four-layer wooden masts offered protection against incoming cannon fire, and a jong under attack could return the favor with its own opposing ordnance. 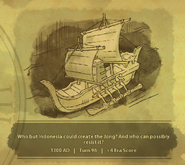 Historic Moment for building the Jong
Community content is available under CC-BY-SA unless otherwise noted.
Advertisement