King of the Hawaiian Islands

Wikipedia has a page called:
Kamehameha I

Kamehameha I speaks Hawaiian. On his diplomacy screen, he is on a tropical Hawaiian beach with several houses and two boats in the background.

Voice Actor: Uncredited (known to be David Siers, a University of Hawaii scholar)

Kamehameha will usually focus on winning a cultural victory. He may occasionally try for a diplomatic victory, but will almost never attempt a domination victory.

Kamehameha tends to have a small offensive army but a substantial defensive army. He also likes to raise a strong and dominant naval force.

Culture and keeping his people happy.

Kamehameha is very easy to make friends with, as he will often declare friendship and is particularly loyal. Conversely, if Kamehameha sees the player as a warmonger, he will turn hostile, and this can often lead to an outright denunciation from him.

Kamehameha will usually try to befriend city-states. He may sometimes bully them, but he is very unlikely to attack them.

One of the most respected leaders in Hawaiian history, Kamehameha I was the first man to unify all the Hawaiian Islands, establishing the independent Kingdom of Hawaii. His birth and early actions in life fulfilled many ancient Hawaiian prophecies, and he became one of the greatest warriors in recorded Hawaiian history. Beyond his military prowess, Kamehameha was also a great statesman, and established important wartime edicts which have become the basis for many humanitarian laws around the world.

Early Life, One of Prophecy[]

Ancient legend held that one day a great king would be born who would unite the whole of the Hawaiian Islands, and a flame across the heavens would herald his coming. In 1758, Halley's Comet streaked across the sky of Hawaiʻi - many accounts state that Kamehameha was born shortly thereafter. Known originally as Paiʻea (the "hard-shelled crab"), Kamehameha was born to Chief Keu a Nui of the Big Island. Ke ua was but one of many lesser chiefs on the island, which had been split into multiple districts during a succession war in the previous generation. Alapaʻinuiakauaua, a rival chief in the area, had reclaimed much of the island for himself, and was the de facto ruler.

At news of Paiʻea’s birth Alapaʻi became alarmed, for the great king of legend was also known in other records as the "killer of chiefs" - a unified Hawaiʻi wouldn’t need tribal chiefs any longer. Alapaʻi ordered the child slain. Ke ua, however, was well aware of his child’s ominous birth and hid him away with another noble family.

For five years Paiʻea lived in secret, until Alapaʻi (for reasons unknown) invited the child to return to court under his protection. During this time at the court, Paiʻea learned the kingly disciplines of diplomacy and war and earned his more famous name, Kamehameha, meaning "the lonely one."

After Alapaʻi’s death, Kamehameha became an aide in the new chief’s court. This lasted until 1782, when the kingship moved on to a new ruler and Kamehameha was promoted to an important religious position. With this new found power, Kamehameha began to build himself a support base among the lesser chiefs of the Kona district of the Big Island. Eventually garnering the support of five chiefs, Kamehameha challenged the local court. At the battle of Mokuʻohai, Kamehameha’s forces defeated the ruling chief and Kamehameha became the new ruler of the Kohala, Kona, and Hamakua districts.

From here, Kamehameha successfully conquered the neighboring district of Puna in 1790, but soon had to face an uprising in Kaʻu led by rival Keu a Kuahuʻula. Ever a religious man, Kamehameha constructed a large temple in a bid to gain favor of his gods and the divine blessing to quash the rebellion. In 1791 the temple was finished, and Kamehameha invited Ke ua to meet with him. Accounts differ on exactly what happened at that fateful meeting on the beach, but in the end Ke ua was killed by musket fire and Kamehameha became the king of all the Big Island.

Kamehameha was driven to unite more than just the Big Island - he had his sights on ruling all of the Hawaiian Islands under one banner. Adding fuel to his wish was another ancient legend, one he was purported to have fulfilled. On the Big Island a massive boulder was placed by the gods - the 3,000 pound Naha Stone. Legend stated that a mighty warrior would emerge one day who could lift it, and he would be known as the great king and unifier of all the islands. At age 14, Kamehameha was recorded as the only person to accomplish this feat. Confident from his round of victories and multiple fulfilled prophecies, he began to lay the plans for the rest of the islands.

In a happy coincidence for Kamehameha, British and American traders began to arrive on the island and gladly sold him guns and ammunition. With his technologically superior weapons, he quickly moved to take Maui and Oʻahu in 1795. With only 10,000 soldiers he quickly decimated Maui’s forces and moved into Oʻahu. He met with fierce resistance at the cliffs of Pali (mostly from a defected commander), but in the end he defeated the enemy soldiers, driving many over the deadly cliff's edge.

Only two islands remained now - the western islands of Kauaʻi and Niʻihau. From his capital at Honolulu, he constructed a massive warship and attempted his first invasion of Kauaʻi in 1796. A rebellion on the Big Island, led by his brother, forced him to return and reassign his forces. Not easily foiled, he tried again to take Kauaʻi in 1803, but this time a deadly disease broke out among his men. Tired of his setbacks, Kamehameha then constructed the largest armada in Hawaiian history, filled with European schooners, massive war canoes, and deadly cannon. The chief of Kauaʻi, Kaumualiʻi, viewed the approaching armada with perhaps a twinge of trepidation, and decided he’d have better luck of survival with negotiation. In 1810 Kuamualiʻi became a vassal of Kamehameha, who then became the sole ruling power in all of Hawaiʻi.

The Napoleon of the Pacific[]

Not just a conquering war hero, Kamehameha immediately went to work on improving life on the islands and solidifying the unification. He created a single legal system, establishing taxes, and opened official trade with Europe and the United States. Kamehameha also created the basis for Hawaiʻi eventual state constitution, the Law of the Splintered Paddle (the Māmalahoe Kānāwai). This law had its humble beginnings during one of Kamehameha’s early military engagements. During a raid, Kamehameha caught his foot under a rock and was ambushed by two local fishermen, who were quite fearful of the legendary warrior. Scared that he would kill them, they smacked him in the head with their canoe paddle, cracking it in half. While he was stunned, they ran and left him for dead. Twelve years later, the two fishermen were found and brought to justice; at least, they thought they were. Instead, Kamehameha apologized for attacking innocents and gave the two men gifts of land, proclaiming that all noncombatants would be protected during war from here out. His Splintered Paddle law has since influenced many later humanitarian laws of war around the world.

During his reign, he also managed to keep Hawaiʻi an independent nation while all other Polynesian islands apart from the Kingdom of Tonga were swallowed by hungry colonial powers. This legacy of independence earned him the nickname, the "Napoleon of the Pacific."

Death of a Legend[]

On May 8, 1819 Kamehameha died a respected king, legendary warrior, and father of seven children. In the sacred custom of the Hawaiian religion, his body was hidden by his closest friends so that none may know of its location and steal his power, or mana, for personal use. The site of his burial still remains a mystery to this day.

Kamehameha remains one of the most important people in Hawaiian history and one of its most respected leaders. He abolished the practice of human sacrifice, protected the innocents during war, and established one of the few independent nations in all of Polynesia. Whether his birth was divinely inspired or not, none can argue that he fulfilled the role of the great king foretold by ancient prophecy centuries ago.

Greetings and blessings be upon you, Kamehameha the Great, chosen by the heavens to unite your scattered peoples. Oh mighty King, you were the first to bring the Big Island of Hawai’I under one solitary rule in 1791 AD. This was followed with the merging of all the remaining islands under your standard in 1810. As the first King of Hawai’i, you standardized the legal and taxation systems and instituted the Mamalahoe Kanawai, an edict protecting civilians in times of war. You ensured the continued unification and sovereignty of the islands by your strong laws and deeds, even after your death in 1819.

Oh wise and exalted King, your people wish for a kingdom of their own once more and require a leader of unparalleled greatness! Will you answer their call and don the mantle of the Lion of the Pacific? Will you build a kingdom that stands the test of time? 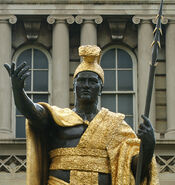 Portrait of an older Kamehameha from Bishop Museum in Honolulu
Русский
Community content is available under CC-BY-SA unless otherwise noted.
Advertisement