Food from every adjacent Fishing Boats
+1

Tourism for every bonus

Wikipedia has a page called:
Kampung

The Kampung is a unique tile improvement of the Indonesian civilization in Civilization VI. It must be built on Coast or Lake tiles adjacent to sea resources.

The Kampung is a rare tile improvement that is absolutely game changing to the civilizations. It is so powerful that it allows Indonesia to do what others consider to be an impossibility: settling and growing productive cities on tiny landmasses. Prime locations to look out for are the ones rich in sea resources. Ones with many concentrated spots of sea resources allow constructions of Kampungs with powerful yields, helping cities grow and become productive faster, while ones with spread out resources allow the constructions of many Kampungs, so these cities will grow taller and for a longer period of time. At the beginning, each Kampung provides 1

Food for each adjacent Fishing Boats. With a Lighthouse in place, considering a Kampung will be next to at least one Fishing Boats improvement, combined with the base yields of Lake and Coast tiles, each Kampung can provide 4

Gold, which is really powerful. With the Renaissance tech Mass Production, each Kampung provides a whopping 2

Housing as a Neighborhood in a Breathtaking tile. Remember, unlike other

Housing improvements, the strongest selling point of Kampungs is that they can be placed next to one another; therefore, just 1 sea resource can be totally surrounded by Kampungs, which results in a massive amount of

Housing very early on. Although it seems like this improvement only has 2 scaling points in terms of yields at Mass Production and Civil Engineering, that is not all there is. Taking into account that the Lighthouse and the Seaport also add extra to Coast and Lake tiles, every Kampung tile will be bustling with an eclectic mix of yields, especially when you manage to cover the entire coast with this improvement. Just with the Kampung alone, Indonesia can set up populous and productive cities even when the amount of land given is limited, and they can easily claim spots where other civilizations may fear to tread. For this reason, Auckland should always be your number one city-state to compete for, and the Mausoleum at Halicarnassus is also a top tier Wonder that you should pay close attention to when playing as Indonesia.

Up until the Modern Era, Kampungs can only be built next to Fishing Boats resources. When

Oil is revealed, more locations can be filled with Kampungs, since they can be built next to

Oil as well, but the yields will not be improved by adjacent Offshore Oil Rigs.

Food. For an Indonesia play-through pursuing a Culture Victory, this is essential. The base

Food yields of the Coast and Lake tiles will not generate

Tourism, but the additional

Food from the Lighthouse does. Each Kampung, therefore, has the potential to generate around 2 to 4

Tourism, and considering the sheer number of this improvement in your whole empire, this can be really significant. If you want to go down such path, remember to invest into Theater Squares early on to grab some

Great People, which can also help you generate

Culture to unlock your Jong faster. Since your civilization loves settling on small landmasses, your precious bits of land are often dedicated to building Wonders and

Districts, which makes fitting National Parks inside your cities a tall order. For that reason, prioritize researching Cold War to unlock Rock Bands to spend your

In the densely-packed islands of Southeast Asia, local rulers faced the challenge of how best to house their people while also keeping them safe from floods and wildlife. Their answer – communities of tightly-clustered houses on stilts, or the kampung.

While the term is a general one referring to a neighborhood, Indonesian kampungs were famous for helping Java achieve the highest population density of any island in the world. Indeed, foreign visitors were so impressed by the efficiency of Indonesian and Malay kampungs that they adopted the term in the English ‘compound.’ 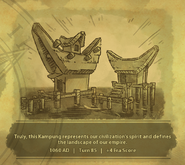 Historic Moment for building the Kampung
Community content is available under CC-BY-SA unless otherwise noted.
Advertisement