Wikipedia has a page called:
Kasbah

Use the Kasbah to turn your deserts into useful terrain, even without Petra. This improvement is especially useful on desert hills, which already have +2

Production, and will additionally help with the defense of the area!

A Kasbah is a type of medina (a walled quarter in a city) found in the countryside, usually a small settlement on a hilltop or hillside. Originally the home for a tribal chieftain or important Islamic imam, the Kasbah is characterized by high-walled, windowless houses and narrow, winding streets. It is usually dominated by a single fortified tower. Kasbahs were common along the North African coast and Middle East until the early 1900s. Building a Kasbah was a mark of wealth, influence, and power for Moroccan and Algerian families of Arab descent. 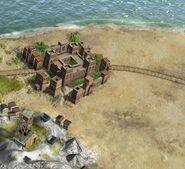 Kasbah in game
Community content is available under CC-BY-SA unless otherwise noted.
Advertisement