Wikipedia has a page called:
Kheshig

The Keshig is a unique ranged cavalry unit of the Mongolian civilization in Civilization VI: Rise and Fall.

In the Gathering Storm expansion, the Keshig requires 10

Although the Keshig is classified as a ranged cavalry unit, it uses the ranged units' promotion table. Depending on which promotions it's given, it can either be used as an anti-infantry weapon or a siege weapon, and its top-tier promotion will allow it to attack twice per turn. It also has Escort Mobility by default, so it's good at getting Great Generals, Battering Rams, and Siege Towers to the front lines of the battlefield in a hurry, especially when considering its

Movement can be further bolstered by the Ordu.

Be warned that anti-cavalry units will do extra damage to Keshig, so try to pick them off before they reach melee range or support your Keshig with melee units.

As the Keshig is a ranged cavalry unit, the -17

Combat Strength) only on defense, not on offense, and it can still capture enemy cavalry units.

The Mongolian keshig were the elite imperial guard of the Great Khan. These mounted warriors, originally comprised of Genghis Khan’s most loyal fighters, grew to 10,000 strong among later khans. The keshig were well equipped, using their composite bows and mobility to harry opponents from a distance. As horse archers, they were second to none. Their peculiar rank as the Khan’s guard put them above even the commanding officers of an army—unsurprising, for they were predominantly composed of young warriors from prominent households. 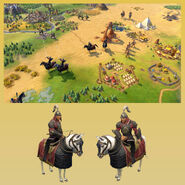 In-game image and concept art/render of the Keshig 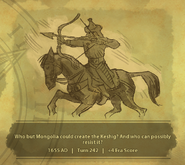 Historic Moment for building the Keshig