Combat Strength bonus when fighting in hill terrain. No

Wikipedia has a page called:
Khevsurians

The Khevsur is a unique melee unit of the Georgian civilization in Civilization VI: Rise and Fall. It replaces the Man-At-Arms and is unlocked with Military Tactics.

In the Gathering Storm expansion, the Khevsur requires 10

Faith when you choose to build Grand Master's Chapel and adopt Theocracy as your government. However, since Georgia's

Faith generation power is quite restricted and extra

Faith from the Tsikhe does not come into play until the next era (which happens to be when the Khevsur becomes obsolete), it is very hard to use this unit within its limited time frame. Moreover, since you can decide only where you settle and not where your opponents do, the

Combat Strength bonus when fighting in Hills will most likely benefit you only on defense. When Georgia is under attack, a Khevsur defending on a Hills tile can have the same

Combat Strength as a Musketman, and it exerts zone of control on all nearby tiles. Whether for offense or defense, the Khevsur is commonly used in combination with the Oligarchy government, or the Oligarchic Legacy

Production per Knight), these units become much more useful, since their

Combat Strength is situationally on par with that of Knights, and they are a much more economical choice. Second, Military Tactics is no longer a leaf technology, meaning you actually need to research it in order to move on to other technologies. In Vanilla and Rise and Fall, this is not the case, as very often, civilizations can skip this technology completely, especially when they have no intention to go on a conquest, and can always unlock better units somewhere else for defensive purposes. As a result, the Khevsur often gets left in the dust, since unless 4 extra Era Score can mean a difference in terms of Ages,

Science is generally worth being invested elsewhere. This major change brought by Gathering Storm revitalizes these units, as now they become much more incorporated into the grand strategy of their respective civilization. The April 2021 Update gives it a further buff by introducing the Man-At-Arms, a new standard unit that the Khevsur now replaces. This means if your treasury is doing well, you can prepare for the arrival of your unique unit by training Swordsmen and upgrade them. However, considering the Khevsur is most likely a defensive unit, and it is quite difficult to have a game with Georgia where your

Gold income is abundant enough to pull this off, this is rarely the way to go. If you want to go to war using this unit, build the Grand Master's Chapel, purchase Khevsurs with

Faith and they will pay themselves in

Faith thanks to Tamar's

Unlike Civilization V, the site of the battle in Civilization VI is actually the tile of the defender, not the attacker. Therefore, similar to other bonuses that grant extra

Combat Strength when "fighting on" certain terrain, the Khevsur will receive extra

Combat Strength when it attacks a unit standing on Hills, regardless of where the Khevsur stands. Also, the Khevsur will receive extra

Combat Strength on defense if it gets attacked while standing on Hills.

The warriors from Georgia’s Khevsureti territory maintained their traditions for countless generations. (Until the early 20th Century, they continued to fight with weapons and armor more suited to medieval times.) These fierce Georgians dressed in chainmail and carried swords, axes, and small, black bucklers adorned with crosses for nighttime raids—due to the shield’s color, the warriors were practically invisible in the moonlight. Though tradition was their watchword, they did adapt with the times, incorporating firearms as their importance on the battlefield became unmistakable. 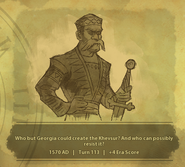 Historic Moment for building the Khevsur
Community content is available under CC-BY-SA unless otherwise noted.
Advertisement