watch 02:45
Wiki Targeted (Games)
Do you like this video?
Play Sound

Colossal alien naval unit. Kraken should be avoided at all costs.

Krakens spawn in the ocean at first, but may migrate to coastal areas. As a colossal unit, it Pillages improvements on tiles it moves through.

The power of your naval unit or units attacking the kraken in their first volley is important. If you can do enough damage to it with your first attack, that it can only move one space each turn, then you have easily won. Any ship can easily move out of range of it, and then open fire and hit it, in the same turn. It will move next to it the following turn, and then its turn is over, it unable to attack. The ship can keep moving off to leave a space between it and its target, and then firing away, until the creature is dead. Ramming it with an aquatic city also works (and may even give the achievement Ramming Speed).

The legendary “Kraken” of Norse mythology first appears in the saga Orvar-Oddr in which the hero encounters a fearsome beast in the Greenland Sea the size of an island, which submerged for days but would occasionally rise to the surface to devour ships, whales and other fare. Whereas the Kraken of Old Earth was legend, to the dismay of the human colonists, such actually exist on this planet. Designated a cephalopod by colonial zoologists for its bilateral symmetry, prominent head and set of tentacles, it also has a calcareous outer shell that protects the upper body, much like a crustacean. The Kraken has multiple, symmetrical rows of razor-sharp radula, capable of grinding through the toughest materials, set behind a powerful two-part chitinous beak.

Generally passive, Vivens Bestia Insulae can be roused to attack by perceived threats to its young or while feeding. Fortunately, at first colonial encounters with Kraken were infrequent as they rarely rose to the surface for lengthy periods; too, the indigenous Kraken are iteroparous, producing few eggs at a time with lengthy periods of infertility between. Once hatched, the length of time for the paralarvae to develop to adulthood spans decades. Finally, the sensory organs of Vivens Bestia Insulae are rudimentary and extremely inefficient when on the surface, so the beasts generally did not approach humans except by accident. These factors tended to limit the number of meetings with Kraken … at least until settlers established outposts on coastlines and began transit of the deep waters.

The Kraken is the largest known species native to the planet, exhibiting abyssal gigantism on a scale dwarfing anything on the home world. It has been theorized that this gigantism is the result of adaptation to scarce food sources in the deeps, coupled with cold temperatures and greater pressures than in coastal waters. From a shell dredged during a construction project, a full-grown adult can surpass 336 meters in length, being almost as broad; by contrast, this surpasses the flight-deck size of the largest aircraft carriers ever constructed by any Old Earth navy. Much is as yet unknown about the anatomy, life cycle and intelligence of Vivens Bestia Insulae, but research continues concerning this unique creature. 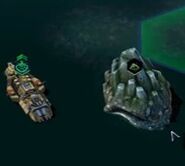 Add a photo to this gallery
Retrieved from "https://civilization.fandom.com/wiki/Kraken_(CivBE)?oldid=215619"
Community content is available under CC-BY-SA unless otherwise noted.