Civilization Wiki
Register
Don't have an account?
Sign In
Advertisement
in: Leaders (Civ6), Steam achievements in Civ6, Chinese,
and 2 more

Economic policy slot in all Governments. Gains a random

Inspiration upon first establishing a

Likes civilizations with a strong military and

Gold output. Dislikes those who have a weak military or low


"Enter into friendly relations with each other from now on. We think all countries belong to one family."

Kublai Khan (23 September 1215 – 18 February 1294), also known as Emperor Shizu of Yuan, was the fifth Khagan of the Mongol Empire, from 1260 until his death. He also founded the Yuan dynasty in 1271, following his conquest of China, and ruled as the first Yuan Emperor until his death. He leads both the Chinese and the Mongolians in Civilization VI: Rise and Fall.[1]

Kublai Khan, unlike his grandfather, focuses on establishing

Trade Routes and using the accompanying

Inspirations to fuel a Science Victory.

Kublai Khan, grandson of Genghis Khan, you will amass an empire to rival his. You know when to bend and when to strike to gain the advantage. Your wit and political prowess will serve you, as will your martial skill in your conquests.

Kublai Khan's unique agenda is Pax Mongolica. He likes civilizations who have a strong military and high

Gold yield per turn, and hates those who have a weak military or low income.

His leader ability is Gerege. All of his governments receive an additional

Inspiration when he first establishes a

With an extra Economic Policy slot available, Kublai Khan is well-positioned for a number of different victories. His

Trade Routes need to keep running, though, so he should be careful about planning new wars. Kublai is always looking for new friends, as he receives

Inspirations from the first successful

Kublai Khan is voiced by Erdenechuluun Tumurbaatar. He speaks Mongolian.

According to Andrew Alan Johnson, the writer of Civilization VI from Firaxis Games, "Some of KK's lines come out of the Yuan-era poetry that he loved. Others were meant to sort of invoke it."[2]

Delegation: A camel train approaches your borders, bearing silks and spices, horse milk and mutton, and tales of the great Khan.

Accepts Delegation from Player: I challenged your delegates to a wrestling match. They may be a bit bruised today.

Rejects Delegation from Player: We have poetry, composite bows, and horse milk. We don't need your leftovers.

Accepts Player's Declaration of Friendship: Oh, prince of friends! The grasses sing of you.

Rejects Player's Declaration of Friendship: I have enough friends.

Requests Declaration of Friendship: Come, enjoy good wine and low-voiced songs, let us drink and let the sun and moon come and go!

Player Accepts Declaration of Friendship: Oh, prince of friends! The grasses sing of you.

Player Rejects Declaration of Friendship: You have rejected the Khan's offer of friendship. Let that sink in.

Accepts Deal: Yes. May profits pour from both sides.

Denounced by Player: Whether you acted through ignorance or intent, the result is the same. You have annoyed me for too long, and I will no longer stand your insolence.

Denounces Player: A day is coming when your kingdom will be consumed like grass in a wildfire. On that day, I shall rejoice.

Invitation to Capital: In my capital, I have arranged a wrestling match between our two strongest warriors. Come and drink fermented mare's milk with me!

Invitation to City: May I tell you of the pearl of the Silk Road? And might you tell me of your lands?

If anyone could expand and unite the Mongolian Empire, it would be the grandson of Genghis Khan. Kublai Khan reigned from 1260 to 1294 AD and created an empire that ran from the Korean Peninsula to the very edges of modern-day Baghdad.

Kublai was born in 1215 AD and was the fourth son of Tolui. Even as a child, he proved to be a skilled horseman and warrior. He joined his father on campaign and gained a reputation even as a teenager for being a respectable fighter. Kublai also spent time educating himself, especially in Chinese arts and literature, which would help him later as he became the Yuan Emperor.

After his father died, Kublai watched the line of succession. Finally, the title of Great Khan passed to Kublai’s older brother Möngke. Initially, he supported his older brother's rule, and his loyalty earned him the position of ilkhan, or viceroy. He used this time to learn from his brother, make allies, gather his advisors, and serve as a warrior on the field when needed. However, following his brother’s death in 1259, AD, he was forced to fight against his younger brother, Ariq Böke (who was far less patient than Kublai had been), for the title of Great Khan. Despite Ariq Böke’s popularity, Kublai commanded more resources and the support of multiple princes from across Central Asia, giving him the edge needed to secure the title.

Being “Great Khan” wasn’t enough, though. Kublai wanted more. Looking at the bigger picture, Kublai saw a split empire—the remnants of his grandfather’s legacy—and he sought to unite it once more, and to take it even further. He set his eyes on China.

The initial foray in to China took five years, but Kublai steadily captured Chinese cities, beginning with Hsiang-yang and Fan-ch’eng before moving on to take the capital of Song, Lin-an, in 1276 AD. He was merciful and spared the Chinese boy-emperor and his mother, keeping the two as political prisoners within his court. In 1278, Kublai achieved his goal of being declared Emperor after defeating the final prince that stood in his way via a decisive naval battle. With his victory, he became the first Mongol to rule all of China. He started the Yuan Dynasty, and served as its first ruler.

Kublai strategically styled himself in the traditional garb of Chinese emperors. Rather than forcing himself and Mongolian ways on his new subjects, he slipped them in like a splinter—noticeable, but not that much of a pain. Kublai made sure, of course, that Mongolians maintained power, especially within the higher brackets of government, but he didn’t repress his new subjects. Merchants, artisans, central Asians, and Mongolian aristocracy ranked high within the new empire. The Han Chinese were relegated to middle and lower-class citizens and were unable to hold state office. Some were allowed to hold administrative positions, however, particularly those who were well-educated. He tolerated other religions and promoted Confucian ideals, and ruled in a manner that was closer to what the Han Chinese were accustomed to than traditional Mongol kingship.

Kublai made several economic and class changes during his reign as Emperor. He promoted the use of paper money for transactions and encouraged trade with the West including, surprisingly, accepting Western missionaries, being in direct contact with Pope Gregory X. Kublai also knew Niccolo Polo’s son, Marco. Marco Polo spoke positively about Kublai in his journals, and the two maintained a close relationship for at least seventeen years. Merchants and artisans received a tax break under the new regime in part due to Kublai’s appreciation for the fine porcelain created in China. The economy grew under Kublai’s direction thanks to the Mongols’ ability to control and protect valuable trade routes.

Although Kublai was generally well-received and seen as a benevolent emperor, not everyone agreed with him or his policies. Han Chinese citizens were less than thrilled with the new class structure and higher taxes that accompanied it. His cousin Kaidu served as a constant threat throughout Kublai’s reign. Kaidu never succeeded, however, in his attempts to unseat the Great Khan and Emperor.

Kublai fought to further expand his already vast empire throughout his time as Emperor. Some regions submitted quickly, while others resisted, sometimes, it would seem, with luck more than battle prowess. He tried to invade Japan twice, but both invasions failed because of the Japanese superior naval forces or well-timed storms – the kamikaze, or “divine wind.”

Kublai’s productive reign ended after thirty-four years when he died in 1294. The loss of his (favorite) wife and eldest son drove him into a depression. He had lived to be seventy-nine years old.

Kublai Khan (as the leader of China) on the loading screen

Kublai Khan (as the leader of Mongolia) on the loading screen 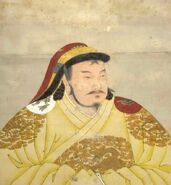