Faith for each adjacent Pasture, increasing to +2

Faith for each adjacent Pasture (with Stirrups)
Provides

Wikipedia has a page called:
Kurgan

The Kurgan is a unique tile improvement of the Scythian civilization in Civilization VI.

For a long time, the Kurgan was, by a wide margin, one of the worst unique improvements in the entire game. Its pitiful yields made it a total waste of a citizen slot, and its only use was to secure an early pantheon. Thankfully, the April 2021 Update breathed new life into the Kurgan. Although at times the Kurgan may feel out of sync with other Scythian abilities, it adds extra dimension and versatility to a civilization that is otherwise very straightforward.

The chief purpose of the the Kurgan stays the same: first, to found an early pantheon without forcing you to run God King, and second, to support your cavalry army. Fortunately, the improvement becomes significantly better at both tasks after the buffs received in the April 2021 Update. The first technology to research is always Animal Husbandry as Scythia, as it reveals

Horses and allows you to build Pastures. A Kurgan next two 2 Pastures is three times as strong as God King, and it indirectly allows you to run Urban Planning instead! As a matter of fact, Kurgans provide more base

Gold each (other improvements have the potential to surpass Kurgan's

Gold output, but they rely on luck with adjacencies to achieve that, most notably the Mekewap), but the Kurgan can be built in large numbers next to each other, since they have very loose restrictions. The Kurgan generates even more

Faith from Pastures with Stirrups, allowing Scythia to be even more competitive religiously. Later in the game, with Flight, Kurgans can generate

Faith, adding an additional dimension to Scythia which didn't exist before. With both a healthy

Tourism and a wide empire claimed in the early game from conquest, Scythia can push for a cultural victory.

Unless you want to go for a religious victory or a cultural victory, don't go overboard with this improvement. Even though it is much better than before, working too many improvements that don't grant

Production stunts the growth and productivity of the city. Only pick out the best spots with multiple Pastures nearby for maximum

Faith output. After the Classical Era, if you want to pivot completely to a religious or a cultural game, you can always build more Kurgans, but for the sake of a domination game, you only need just enough to generate

Gold, and a bit of

Faith to purchase units with the Grand Master's Chapel.

For some reason, some of civilization’s greatest feats of engineering and construction are mausoleums and tombs, and, for some reason, these great piles are usually reserved for military and political leaders. For the Scythians these piles were great mounds of dirt, now called kurgans, from the Turkish word for “mound.” It appears that a number of the barbarian nomads of the steppes of Central Asia began interring their leaders in these mounds sometime around the 4th Century BC. By the Early Iron Age, the kurgans of the Scythians and other tribes were truly impressive mounds, some as much as 500 meters (1600 feet) across at the base, and might stand as high as 27 meters (89 feet). So, these tended to stand out on the rolling open terrain of the steppes. And then the Scythians decorated the tumuli with the bodies of slaves and horses, just to insure it got everyone’s attention that here lie a great man (or perhaps woman). 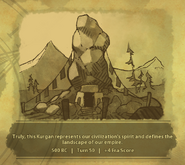 Historic Moment for building the Kurgan
Community content is available under CC-BY-SA unless otherwise noted.
Advertisement