Capital cities within 6 tiles of the

Capital gain +10% to all yields and receive a Builder when founded, while cities more than 6 tiles away receive -15% to all yields. +5

Combat Strength for all units within six tiles of the Mayan

Keeps her cities clustered around her

Capital, and likes civilizations who settle far from her. Dislikes those who encroach upon her borders with cities or troops.


"I am Lady Six Sky, a warrior standing above my defeated foes."

Lady Six Sky (? – 10/11 February 741), also known as Wak-Chanil-Ahau, was a Mayan queen who ruled the city-state of Naranjo from 682 until her death, expanding its power and influence through a series of military campaigns against other nearby city-states. She leads the Maya in Civilization VI.

Lady Six Sky does not rely on the traditional sources of fresh water to establish her close-knit empire; instead she capitalizes on a network of Farms and Plantations to reach for the stars.

Lady Six Sky, great warrior mother of Dos Pilas and Wak Kab’nal, lead your people into a new dynasty. Let your reach grow long so you may conquer your enemies near and far. The Gods will guide you, and you will in turn guide your loyal citizens to victory.

Lady Six Sky's unique agenda is Solitary. She will try to keep her cities clustered around her

Her leader ability is Ix Mutal Ajaw. Within 6 tiles of her

Capital, all her units receive +5

The Maya plan out their settlements differently than other civilizations. They look to get their

Housing from Farms rather than being near Fresh Water. Settling adjacent to luxuries provides them with additional

Amenities as well. Lady Six Sky wants to keep her cities close to her

Capital. So settle an early cluster of cities and defend them strongly with your Hul'che atlatlists. With properly placed Observatory districts receiving extra

Science from adjacent Farms and Plantations you can start to race ahead of the other civilizations in technology, rocketing your people into space or providing a significant boost toward another victory.

Lady Six Sky is voiced by Carla Castañeda Mendoza. She speaks a Mayan language (most likely Yucatec Maya), although she is not a native speaker.

Delegation: My envoys bring to you drinking chocolate, ground with chili peppers and honey. Will you let them in?

Accepts Delegation from Player: Your delegation has been allowed to visit our capital. I promise none will be forced to the great altar of the War Serpent.

Rejects Delegation from Player: Your delegation is unwelcome. Except, maybe, as a sacrifice?

Accepts Player's Declaration of Friendship: We are aligned.

Requests Declaration of Friendship: The War Serpent wanes in the sky, and good feelings rise. Shall we be friends?

Requests Alliance: Venus sets at the appointed mark, and the moon rises over the pyramid. The signs are right for an alliance.

Player Accepts Declaration of Friendship: We shine together in the sky, you and I.

Player Rejects Declaration of Friendship: I must have misjudged you.

Denounced by Player: Jaguars will come for you in the night, and no one will mourn your passing!

Denounces Player: I spoke my counsel with patience, and you did not heed it. I speak it now in anger and frustration.

Invitation to Capital: Let us exchange information about our homes.

Invitation to City: We have a match between our two best teams in the ball court. For the winners, we have a festival arranged at the temple square. We have made arrangements for the losers atop the altar. Will you come and celebrate with us?

Ancient chroniclers talk about a woman who ruled as a king in Dos Pilas. She claimed the titles of male rulers and proved to be a vocal and powerful leader. Even though the chroniclers of the day never said her name, the reputation of the Lady of Dos Pilas nevertheless lived on.

Lady Six Sky, also known as Wak Chan Ahau, followed in the footsteps of her father B’alaj Chan K’awiil to become ruler of Dos Pilas. After assuming the throne in the late 600s, Lady Six Sky left her home of Dos Pilas and journeyed to Wak Kab’nal. It’s never easy being king (especially as a woman), and Lady Six Sky needed to further solidify her power across the region and in Wak Kab’nal in particular. To prove her authority both as the blood ruler and through divine choice, she performed several rituals shortly after her arrival. She was, for the most part, well received by the people, and her authority was ultimately respected, although she never fully ascended as the crowned ruler of Naranjo. Nevertheless, her people erected monuments in her name to show that they respected her rule with or without a crown. She was featured wearing the garbs of the true royal she was (which may have been a bit of an unintentional slap to the face, but presumably she accepted this gift with grace).

Lady Six Sky’s son , K’ahk Tiliw Chan Chaak (or Smoking Squirrel as his friends knew him) assumed the throne at the age of five, but Lady Six Sky continued to rule in his stead (he was a little busy being a child). Like any good mother, she led several successful military campaigns during this time against nearby polities that challenged her son’s—and by extension her—rule. Her monuments shifted to depict her as a warrior standing over her enemies, poised and triumphant. By the time her son was ten years old, she’d already carried out a number of successful campaigns in his name.

War and conquest was not the only thing that Lady Six Sky tackled during her reign as queen and regent. She also helped to perform the religious ceremonies expected of someone from her station. One, the mid-katun, she did in the same way as the previous king of Wak Kab’nal.

Lady Six Sky was determined to establish a new dynasty with her as the matriarch. This meant not only continuing to strengthen her rule through war and religious example, but also by further advancing the prosperity of her people. This was absolutely necessary if Lady Six Sky wanted to hold her power as a woman and the mother of a very young, and thus vulnerable, king. She planned to not just be there for a good time, but also for a long time.

To Lady Six Sky’s and her people’s dismay, Smoking Squirrel had a short rule. He died early, leaving Lady Six Sky to lead once again until her grandson was old enough—or powerful enough—to ascend.

Lady Six Sky lived for another twenty years before she passed in 741 AD. Her grandson was defeated by Tikal, captured, and unfortunately executed, ending the dynasty she worked so hard to build. 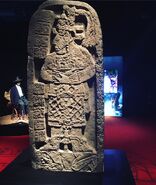