Lake Retba is a two-tile passable Natural Wonder in Civilization VI: Rise and Fall. Lake Retba appears as a Lake on Grassland or Plains tiles. Each Wonder tile provides 2

Production (instead of the normal yields from lake tiles). Lake Retba increases the Appeal of adjacent tiles by +2.

Movement penalty when they embark/disembark from Lake Retba's tiles onto dry land.

Discovering Lake Retba grants +1 Era Score, or +3 Score if the player is the first to do so.

In the Gathering Storm expansion, Lake Retba is treated as a Coast tile. It only provides 1 extra

Housing from settling nearby, its yields can be changed by the Mausoleum at Halicarnassus, and every wonder and improvement that has to be built on the coastline can be built next to Lake Retba, provided that all other conditions are satisfied.

Each Lake Retba tile has a yield of 2

Production. Since Culture is often hard to generate early in the game, incorporating natural wonder tiles can provide a vital head start through the Civics tree.

Like ordinary lake/coast tiles, the yields of Lake Retba's tiles can be increased using certain bonuses. If the wonder tiles are owned by a city with a Lighthouse and Seaport, the yield of the tiles will increase by 1

Production. The Suzerain bonus of the Auckland city-state also increases the tile yields by 1

Production, and a further 1

Culture will apply to any district built next to the Lake Retba.

Unfortunately, as with all natural wonders, Retba's tiles cannot be developed or improved. Because of this, natural wonders may be more of a hindrance than an asset later in the game - a natural wonder in the heart of a City can spoil adjacency bonuses for Farms and districts. In general, passable wonder tiles are significantly better than an unimproved tile of any kind, but are often less productive than an ordinary tile with an improvement or a district.

The “Pink Lake” gets its name from its intense, strawberry pink water. This color changes from pale pink to an alarming rusty red depending on the time of day, season, and composition of the lake. Algae living within the lake, not pollution, cause its shifting palette. For the Senegalese locals, the lake’s changing waters are simply part of everyday life.

Retba’s color is not its only unusual quality. The lake’s hypersalinic water—similar to the Dead Sea—lets a swimmer float on the lake without effort. This means that diving into the lake is not recommended. (Nor is drinking the water.) 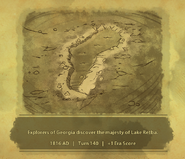