Great Writer point per turn if it has a Shrine.
+1

Great Artist point per turn if it has a Temple.
+1

Great Musician point per turn if it has a Worship Building.

Faith from each adjacent natural wonder.
+1

Faith from each adjacent Mountain
+1

Faith from every 2 adjacent Woods and district tiles.

Wikipedia has a page called:
Lavra

The Lavra is a unique

District of the Russian civilization in Civilization VI. It replaces the Holy Site.

The following buildings can be constructed in a Lavra:

The Lavra, to get it right out of the gate, is a reliably powerful district in every Russia game you will play. Although Hojo Tokimune can build cheap Holy Sites, and Byzantine Holy Sites generate twice as many

Great Prophet points, Lavra combines these two into one, thus ensuring that the Russians will be one of the first civilizations to found a religion every game. As detailed above, it is this high level of reliability, regardless of which civilizations are your opponents, that puts the Lavra in an esteemed position. First pick of religious beliefs is not only powerful, but also very versatile. Seeing Byzantium, Spain or Poland as your neighbor? Pick Crusade. Seeing Gandhi or Arabia and suspecting they may go for a religious victory? Pick Mosque. Since Russia's overall toolkits are so versatile, none of these picks really harm you. With the sole exception of the overpowered combo between Dance of the Aurora and Work Ethics, every other beliefs is viable on different levels with Russia. An extra

Great Prophet is recruited, each Lavra will generate an extra

Great Musician with each Shrine, Temple, and worship building respectively built. This is the same bonus as a base Theater Square. If you have a lot of fully developed Lavras, you may consider building Theater Squares as well to have some Great Work slots to activate your

Faith generation will allow you to purchase Naturalists and Rock Bands to easily pivot a cultural victory.

Lastly, city's borders expand each time a Great Person is activated there. This gives Russia even more incentives to build Theater Squares and focus on cultural development in its cities, attracting all kinds of artistic geniuses who can expand Russia's borders while edging it ever closer to winning a Culture Victory. This bonus will also apply to tiles outside of the usual 3 tile range from the City Center after they have all been claimed. While the tiles in this expansive territory can't be normally worked, they can still host National Parks, Forts, to Missile Silos depending on your needs.

Finally, the fact that it is cheap and offers artistic Great People points makes it a good addition to most cities. Even without any buildings in it, it's still a great source for Great Works, as well as an adjacency bonus and +1 Appeal for other districts.

Faith boost, particularly combined with the Scripture policy card, and you will be well on the way to a religious victory. In combination with the Work Ethic belief with your religion, and later Simultaneum policy card, you will be swimming in

Faith, the two most versatile yields in the game.

In the Eastern Orthodox tradition, a lavra (such as found at Mount Athos in Greece or Neamț in Romania) is a cloistered monastery of cells for hermits with a central church and/or rectory. Perhaps the most famous is the Alexander Nevsky Lavra (trust the Russians to name a holy place after a warrior) in St. Petersburg where many eminent but dead Russians are buried – besides Nevsky, there's Euler, Suvarov, Mussorgsky, Tchaikovsky, Dostoevsky and others. Believed to have its origins in the early 4th century AD, the first lavra seems to have been a settlement of some 600 hermits around Nitria in the Egyptian desert. In the strict Eremitic tradition, these hermit-monks lived a secluded life devoted to prayer, often accompanied by vows of silence, chastity, meditation and/or fasting. Further proof of the lengths to which some of the faithful will resort to be saved. 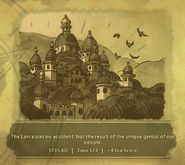 Historic Moment for building the Lavra
Community content is available under CC-BY-SA unless otherwise noted.
Advertisement