The Legion is a unique melee unit of the Roman civilization in Civilization VI. It replaces the Swordsman.

In the Gathering Storm expansion, the Legion requires 10

The Legion's raw strength and ability to create fortifications make it an invaluable tool in early-game expansion. Capturing multiple cities in a single campaign becomes much easier, since defenses can be constructed immediately around a captured city. They can also repair damaged tile improvements.

A different, very powerful, strategy is to use the Legion's ability to spend their

build charge to chop Woods. This allows the Legion to create a sort of chain reaction; training a Legion, and then using the Legion's

build charge to expedite the training of another Legion, and so forth until you are out of Woods. This can get you an extremely large early game army that can spell instant doom for your neighbors.

The legion was the most efficient and effective fighting force in history...well, in its time anyway. A fully-equipped, fully-staffed Roman legion could march across any terrain, laying a road as it did, built a fortified camp at the end of it, and then take any foe or take any wall. During the Empire a legion was composed of infantry, recruited exclusively from Roman citizens, along with the cooks, armorers, engineers, artillerists, medics and command staff (as well as the usual camp followers and sutlers) necessary to operate in the field for years at a time. The light infantry, archers, scouts, and cavalry were generally auxiliaries, provincial non-citizens (those who survived to be honorably discharged gained citizenship) assigned to a legion as necessity dictated. Extremely disciplined (usually), the legion’s heavy infantry were armed with pilum (throwing spear) and gladius (short sword) and conquered most of the known world (granted, a bunch of barbarians and decaying empires) at the time.

A Legion up close 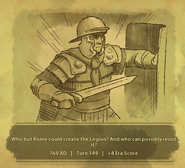 Historic Moment for building the Legion