Liang, otherwise known as The Surveyor, is one of the Governors introduced in Civilization VI: Rise and Fall. She excels at developing the infrastructure of a city and protecting it against environmental effects.

An expert in efficiency, Liang is skilled in all things related to building and construction. An expert planner, she can also supervise the development of custom improvements in the city.

Liang is best used in new cities with low

Production. Her starting title of Guildmaster gives all Builders in the city an extra build charge, so the new city's problems can be alleviated by simple improvements like Farms and Mines. These Builders will have 6 build charges if you have the Serfdom or Public Works Economic policy cards, 7 if you have built the Pyramids, and 8 if you are playing as Qin Shi Huang.

Aquaculture is generally not useful until late eras of the game, where large cities begin struggling to continue growing their population due to their Farms having been replaced by Neighborhoods. The only exception is cities that have been settled in Tundra, Desert, or Snow, where the Ocean has more

Food yield than the aforementioned Tundra, Desert or Snow. You can also use it to help a coastal city with

Infrastructure is more or less just a stepping stone towards Zoning Commissioner. All of the City Center buildings are generally cheap enough that you can buy them with

Gold without impacting your treasury too much, aside from Walls, which cannot be bought, but become obsolete anyway after researching Steel. However, the Government Plaza buildings can be quite expensive, so it isn't a bad idea to place Liang in the Government Plaza's city for a short time after you have gained your preferred Tier 1, Tier 2 and Tier 3 governments and while you are not producing Settlers.

Zoning Commissioner is one of the most useful promotions for any Governor. It is a slightly slower version of Reyna's Contractor promotion. If you do not wish to spend high amounts of

Gold on a new city's Districts, buy only a Builder and redirect a Trader to your new city. Use the Builder to create Mines and Quarries, and send the Trader to a city that will provide large amounts of

Production (preferably both) back.

Amenity issues (e.g. the city is going to spawn Barbarians from too few

Amenities within a couple turns).

Finally, Parks and Recreation is a decent promotion that is similar to Scotland's Golf Course, although is more difficult to place, it won't provide

Culture in certain cases), but does grant 1 extra Appeal. However, the later the game goes, the harder time you'll have justifying the Park's existence because of its need to be placed adjacent to Water, and the fact that it gives no

Housing. After researching flight, it may be useful to generate some tourism.

There's an old joke that says: "Invest in land; they've stopped making it." The truth is that effective use of land is an important job, and efficient use of space begins with understanding what you have through surveys and mapping. Surveying is another trade that goes back to antiquity, and which enjoyed considerable support from those who understand the value of land. 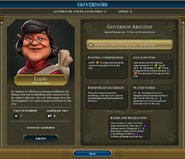