watch 02:34
Wiki Targeted (Games)
Do you like this video?
Play Sound 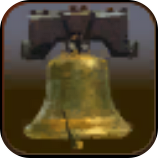 A Liberty bell is produced primarily by colonists working at the Town Hall in each colony. Its function is partly similar to that of the light bulb in Civ games, counting towards scientific and other advances. Like Crosses, Liberty bells cannot be traded, shipped, bought, or sold.

In 1619, not long after the English settlement of Jamestown finally began to take root, its citizens formed the first legislature in the New World - the House of Burgesses. Its goal was to create a body with the power to enact laws to help regulate life in the new colony. It wasn't long, however, before the English King stepped in, requiring all laws passed to go through his bureaucrats before they could be put into effect. Over the next 150 years, the English King kept his colonies on an increasingly tight rein, levying additional taxes, ignoring the rights of the citizens, all of which created increasing resentment against the distant monarchy. By the 1760s, the colonists of the New World had had enough and the taxed and tired citizens began the first dangerous steps to free themselves from English rule. Among these was the creation by the citizens of the settlement of Jamestown - which had by this time become the colony of Virginia - of a new legislature to replace the outmoded House of Burgesses - the Virginia House of Delegates. This new legislature would be among the first to lead its citizens towards liberty.

Retrieved from "https://civilization.fandom.com/wiki/Liberty_Bell_(Civ4Col)?oldid=171772"
Community content is available under CC-BY-SA unless otherwise noted.