Combat Strength for every adjacent Llanero. Fully heals when in range of a Comandante General that activates its retire ability.

Wikipedia has a page called:
Llanero

The Llanero is a unique light cavalry unit of the Gran Colombian civilization in Civilization VI. It replaces the Cavalry.

In the Gathering Storm expansion, the Llanero requires 20

The Llanero is a strong replacement for the Cavalry, and one that helps the Gran Colombians on their march to a Domination Victory. Apart from requiring an easily-obtained strategic resource (if anything) to train, it's very cheap to maintain and gets fully healed within two hexes of a retiring Comandante General. Gran Colombia can have as many as four Comandantes Generales upon unlocking Llaneros, which can accompany them into battle and keep them fighting fit for a good long time.

On top of their other attributes, the

Combat Strength bonus that Llaneros gain when adjacent to each other practically begs Gran Colombia to train them en masse. Six Llaneros have the same

Gold maintenance cost as two Infantry, and their

Combat Strength is almost as high when clustered together (not counting the bonuses they receive from Comandantes Generales and Great Generals). A force of this size can completely surround an enemy city and prevent it from repairing damage while ranged or siege units chip away at its defenses, then quickly reach and lay siege to a new city after capturing their target.

The Llanos grasslands extend across eastern Colombia and western Venezuela, and are the home of those countries’ brave, hardy cattlemen, the llaneros. Separated from the rich coastal Caribbean ports, the llaneros developed a strong individualistic and resourceful streak, something that won them acclaim when they served as cavalry on both sides of the wars of Latin American independence. Famously, one of their own, José Antonio Páez, formed the llaneros into an effective fighting force, especially when facing down the similarly-organized royalist llaneros of José Tomás Boves.

The llanero culture came as Spanish settlers lived near and intermingled with indigenous groups, creating a new, distinctive society with its own music, cuisine, and, especially, its own tradition of horsemanship. Owing to their dislike for the coastal elites, llaneros initially were persuaded to fight for the Crown, but under Páez, the llaneros became a potent force for independence, leading the revolutionaries to victory in the battles of Boyacá and Carabobo. In one memorable scene, Páez led his llaneros through a burning plain, stunning the Spanish, who had been disorientated by the flames and smoke… and the thunder of thousands of horses galloping straight for them! 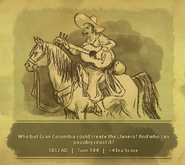