Naval combat units that enter adjacent plots are granted their next promotion.


"In this sea, and in the midst of this solitude, rises a great sombre street—a street for no human footsteps. None ever pass through there; no ship ever ventures in."
– Victor Hugo

Wikipedia has a page called:
Lysefjord

Lysefjord is a three-tile impassable Natural Wonder available in Civilization VI with the Vikings Scenario Pack. Lysefjord may be found on Plains and Tundra tiles. Each Wonder tile provides +1

Whenever a naval combat unit moves adjacent to Lysefjord for the first time, it is granted a free

In Civilization VI: Rise and Fall, discovering Lysefjord grants +1 Era Score, or +3 Score if the player is the first to do so.

Lysefjord can be really helpful (if not crucial) for militaristic maritime civilizations. If you manage to build a Harbor next to Lysefjord, any of your naval units trained or purchased in the city will come with a free promotion!

Another way to make use of Lysefjord is to incorporate it into your empire, but don't build a Harbor right next to it: instead, gain the 2 or 3 first promotion levels for your units through combat, then move them next to Lysefjord to get the top-tier promotions for them. (You'll also receive a small Era Score bonus for each unit that reaches its fourth promotion level.)

It's worth noting that units are able to earn additional promotions from Lysefjord after being upgraded. Naval melee units, for instance, can earn a total of 4 free promotions as long as you have access to this natural wonder throughout the eras. Likewise, when combining units to make Fleets and Armadas, absorb units that have already earned a free promotion into newly trained ones and sail them adjacent to Lysefjord for a total of two more promotions. In the hands of an organised player - with exclusive access to Lysefjord - it's possible to establish a conveyor belt of ships being combined into Fleets then promoted, combined into Armadas then promoted, upgraded and promoted until you end up with a highly experienced navy fit to defend (or topple) any thalassocracy.

If you aren't a big maritime civ, you should try to cut off your opponents' access to Lysefjord, especially if civs like the English, the Norwegians, the Dutch, or the Ottomans are in the game - you don't need their naval units to be any stronger!

Glacial erosion from the Ice Age carved the majestic Lysefjord out of what is now southern Norway. A marathon's length of cold, black water wends between towering cliffs of pale granite. The brighter coloration of these rocks is what gives the "light fjord" its name, despite their tendency to throw the water below into shadow. The striking Pulpit Rock (or "Preikestolen") is the large, flat top of a nearly 2000 ft cliff near the mouth of Lysefjord, perfect for shouting stentorian exhortations at boats passing below. 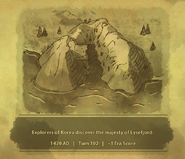