Faith equal to the adjacency

Science bonus of its district

Wikipedia has a page called:
Madrasa

The Madrasa is a unique building of the Arabian civilization in Civilization VI. It is built in the Campus district, replaces the University and is unlocked with Theology.

The most outstanding factor of the Madrasa is that it unlocks with Theology (a Classical civic) instead of Education (a Medieval technology). Just the fact that Education is a difficult technology to beeline while the path to Theology is short and straightforward (and Arabia is guaranteed to be able to trigger its

Inspiration) means Arabia can start constructing this building a lot earlier than other civilizations with their regular University. However, since the Madrasa is not any cheaper than the University, being able to build multiple Madrasas right after it is unlocked is a hard task, so you should combine the construction with Magnus and some Woods chopping. Consider going straight for Theology after researching Political Philosophy (for tier 1 governments), and maybe Military Tradition (for Maneuver to build Heavy Chariots and upgrade them into Mamluks later).

Compared to the University, the Madrasa provides an additional

Faith depending on the adjacency bonus of the Campus it is in. The extra point of

Science does not sound like much on its own but when combined with the fact that you unlock this building long before others get theirs, it becomes quite significant. The extra

Faith is obviously a nice boost to Arabia as a whole, and is especially synergistic with Saladin's bonuses to both

A madrasa (madrasah in Arabic or medrese in Turkish) is a secular institution of education, although often with a religious component. Madrasas would specialize in medicine, law, science, philosophy, religion or the education of women. Others also taught logic, world history, foreign languages, mathematics, art, and comparative literature. The first madrasa, the Gama'at al-Qarawiyyn, was established in 859 AD by Fatimah al-Fihri, the daughter of a wealthy merchant. During the rule of the Fatimid, Ayyubid, and Mamluk dynasties, the practice of sponsoring madrasas by the ruling, wealthy elite spread across Egypt and the Middle East. The first Ottoman madrasa was founded in 1331 in Iznik, and followed the traditions of Sunni Islam. The madrasas of the Turks and Arabs would, as Europe stumbled through the Dark Ages, keep the best of Classical knowledge alive, and build on it with their own inventions. 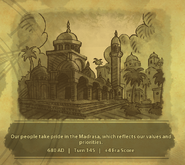 Historic Moment for building the Madrasa
Community content is available under CC-BY-SA unless otherwise noted.
Advertisement