Magnus, otherwise known as The Steward, is one of the Governors introduced in Civilization VI: Rise and Fall. He excels at procuring resources, expanding your empire and boosting cities'

Enterprising and capable, Magnus is able to procure valuable resources when needed. He is also quite skilled in optimizing the overall

Production in the city.

Magnus is one of the most powerful Governors in the right hands even without any promotions. Groundbreaker increases harvests by 50%, so having Magnus in a city with many Bonus resources or Woods and Rainforest will provide a massive boost to your

Production, which can be critical in finishing Wonders, Districts, their accompanying buildings, or anything that counts toward the Science Victory.

Surplus Logistics is best used in your smallest city. To make full use of this promotion, send

Trade Routes from your newer and smaller cities to your largest city to quickly grow the smaller city's population. This is especially useful if you do not have Reyna's Contractor promotion (if you have Reyna at all). Couple this with the Collectivization policy card gained from researching Class Struggle, and your new city is already gaining at least +6

Production. In later eras where most of the valuable land has been settled, place Magnus in cities that have great potential for high

Production output that do not have an Industrial Zone yet.

Black Marketeer is useful in wartime. Even if you do not have, say,

Oil for a Tank, you can still build one in Magnus's city, which may potentially turn the tide in your favor.

Vertical Integration is best used in a city surrounded by other cities. This will raise the chance that more of your Industrial Zones will affect Magnus's city and boost its

Production. If you can couple this with Toronto's Suzerain bonus, you may even receive more

The title of "steward" dates back to the Dark Ages, and is given to the representative of the lord of a manor who can act on their behalf in their absence. It is a position of great trust and importance, and a good steward acts to improve the wealth of the estate. 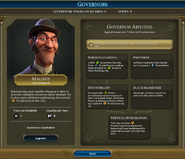