Wikipedia has a page called:
Malón

The Malón Raider is a unique light cavalry unit of the Mapuche civilization in Civilization VI: Rise and Fall.

The Malón Raider excels at raids and defending Mapuche border cities or attacking a nearby neighbor. It is unlocked with the same technology as the Musketman, have the same

Combat Strength, more mobile (since it is a light cavalry unit), and very slightly cheaper (10 less

Production). However, it is a standalone unique unit, so if you want an effective push with this unit, you need to commit your research to beeline for it. The policy card that boosts the production of this unit is Chivalry, unlocked with Divine Right. A huge benefit of the Malón Raider is that it does not require any strategic resources, regardless of game versions, so it won't put further strains on your limited resource pools against other units of the same era. Two or three Malón Raiders can lay waste to the

District and tile improvements around an enemy city and then lay siege to it, preventing it from healing while other units chip away at its defenses or deal with enemy reinforcements.

Since this unit basically starts with the Depredation

Movement it has, the scarier it gets. A

Great General is recommended, so you should invest some

Production in building Encampments (having an Armory triggers the

Faith, which can be put back into purchasing even more Malón Raiders or other units. Being able to instantly purchase units is a number one strategy to counterplay the downside of having a standalone unique unit. Whenever you use this unit, remember to plug in Raid, as it will massively boost the efficacy of pillaging.

Combat Strength bonus, if the Malón Raider attacks into or defends on tiles that are within a 4-tile radius of any tile that is considered "friendly territory," it will receive +5

Combat Strength. The term "friendly territory" can be understood as anywhere you can upgrade your units or heal them at an accelerated rate: your own territory, your tributary city-states' territory or your Allies' territory. The radius of this ability is relatively large, allowing the Malón Raider to benefit from the territory of newly conquered cities and have an easier time pushing further into the heart of the opponent's empire.

The 16th Century brought a Spanish invasion to what is now southern Chile. It also brought horses, which the Mapuche had never seen before encountering the conquistadors. Their presence on the battlefield forced the Mapuche to adjust their tactics. They quickly learned how to use horses, turning one of the greatest Spanish advantages against them. The mounted malón raiders—so named for their retributive attacks on invaders—would launch quick raids to harass an enemy, before leading a responding enemy into an ambush. 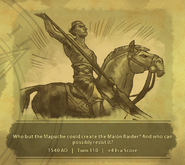