Civ ability - Songs of the Jeli

Production towards buildings and units.

Gold for every flat Desert tile in the sending city. Entering a Golden Age permanently grants +1

Leader agenda - Lord of the Mines

Tries to build up

Gold, and likes those that also focus on

Gold. Dislikes civilizations with a weak

The Mali people (or Malians) represent a civilization in Civilization VI: Gathering Storm. Their colors are crimson and gold, and they are led by Mansa Musa.

The Malians' civilization ability is Songs of the Jeli, which provides their City Centers with additional

Faith, but increases the

Gold output of their Mines at the cost of

Production and gives them a 30%

Mali should focus on generating

Faith by settling cities in the desert. Doing so will also grant you bonus

Food to grow cities in areas in which other civilizations struggle in and let you pick the first pantheon most of the time. Choosing Desert Folklore is a wise decision, seeing as you want to construct Holy Sites anyway to boost the yield of your unique district, another important component of your Mali game. Having both high income and reduced buying cost will help you overcome your

Gold. You can put your accumulated

Faith to good use by purchasing Suguba buildings, religious (if you manage to found a religion), military (via the powerful Grand Master's Chapel), or Naturalist and Rock Band units. As you might have guessed, the Grand Master's Chapel is the clear winner for buildings in the Government Plaza.

Trade Routes from your prosperous desert cities. Try to achieve as many Golden Ages as possible to increase your trade capacity. Don't worry about the possibility of getting your Traders pillaged; deploy Mandekalu Cavalry units to guard them on their long journeys. Having good relations with trade recipients leads to the creation of Alliances, which can supply your cities with

Gold. Consider going for either a Religious or Cultural Victory, which can be decently supported by your

Trade Routes to other civilizations. Having a lot of

Gold to support the maintenance of

As Mali, you may want to settle your cities closely. While this will give you less production per city (and even less than usual because of their negative bonus towards Mines'

Production), this will allow you to place more Sugubas and Holy Sites, which will increase the number of

Trade Routes and amount of

Faith you will have. When founding a city, building a Suguba should be your first priority, followed by Holy Sites. By building such an empire, you can drown yourself in

Gold, and drown your enemies in religious units.

Mali is weakest before unlocking Currency, and as they have no bonuses at this stage of the game other than a rather irrelevant

Faith increase, they can easily be stomped on by rival civs. If playing against Mali, should you spawn beside them, destroy them or cripple their early expansion efforts as soon as possible.

The Kingdom, and later Empire of Mali was a remarkably long-lasting, pious, and rich empire, built on a foundation of trade between the Sahara, Sahel, and Subsaharan regions of Africa, unified by an Islamic faith, and administered capably by rulers for over 300 years. The Empire of Mali was at its height of power between the 13th and 16th Centuries, until it fractured under internal pressure and external threats.

West Africa is blessed with a wealth in three valuable treasures: Gold, salt, and copper. The demand for these commodities has meant long-standing trade routes across the region for most of recorded Western history, and the introduction of the camel as a beast of burden during the 2nd Century enabled an increasing volume of trans-Saharan trade.

Into this context, the kingdom of Mali arose in the 9th Century as a local power. Islam spread to the region in the 10th or 11th Century. Mali began a campaign of expansion and conquest under Sundiata (or Sunjata) Keita in the early 13th Century, who is the subject of some of the most famous praise-songs of the Malinese jelis, or griots. Sundiata defeated the Sosso at the Battle of Kirina in 1235, setting Mali on its ascent. According to the Epic of Sundiata, he gathered the nobles to charter a government for Mali, organizing the society, declaring property rights, protecting the environment, declaring rights for women, and listing personal responsibilities—a remarkable document that has been declared a UNESCO Intangible Heritage item. The charter even lists the person who can joke with the royal family.

The kingdom was organized more as a confederation of allied city-states and locally administered territories. There was a noble, warrior clan aristocracy, as practiced in other places throughout the world. These rulers were advised by the jeli, a person who combined the role of troubadour, oral historian, and bard. The role of jeli or griot is still an important one throughout West Africa today. Sundiata started a process of centralizing more of this rule under the Manden, but local rulers and ruling families maintained authority after swearing allegiance to the Mansas of Keita.

Mansa Musa Keita I, the grandnephew of Sundiata, ruled for 25 years at the start of the 14th Century. During his lifetime he undertook a famous hajj to Mecca, bringing (and spending) an immense fortune in gold. While he was abroad, he recruited Islamic jurists, scholars, artists, and scientists from around the Islamic world, and invited them to return to Mali with him. Also during his Hajj, Malinese generals conquered the Songhai kingdom and incorporated the cities of Timbuktu and Goa into the empire. Musa returned to his own throne through these newly-conquered lands.

Timbuktu was already a rich trading city, situated on the edge of the Sahara and an important waypoint in the gold and salt trades. Mansa Musa ordered mosques built and the madrassa at Sankore enlarged, where it would become Africa's largest library and a center for jurisprudence (much as Bologna was becoming such a center of learning in Europe at the time). Their distinctive earthen construction was new for the era, but is now considered an iconic part of Malinese architecture.

Ibn Battuta, the legendary traveler and chronicler, passed through Mali from 1349-1353, and remains one of the best sources for life in Mali during the apex of the Empire. During his visit, he remarked positively on the Malian regard for justice, the public safety and absence of banditry, and the public devotion to Islam. He was less enthusiastic about the free mingling of sexes (he thought it unseemly, to say nothing of the dress code), the tolerance of pre-Islamic cultural and religious traditions (he thought it an insult to the faith), and Mansa Souleyman Keita's gifts of traditional foods (he thought them insufficient to his station).

Records of the Malian Empire are sparse from the 14th - 16th Centuries, possibly as a result of weakening central authority and ineffective rulers. Shifting ecological conditions may have contributed to some of the problems of the late empire. The southward expansion of the Sahara impinged on the woodland regions, reducing supplies of wood for fuel, and the wetter conditions of the early 16th Century may have led to the spread of tsetse flies, which prevented the Mandekalu cavalry from pushing southward. Weaker rulers, and growing power of Morocco and a resurgent Songhai, and a succession crisis on the death of Mahmud Keita IV resulted in the Manden heartland splintering into a series of successor states.

Mali's unique combination of traditional West African and Islamic cultures, oral heritage (particularly the role of the jeli or griot), and its fabulous wealth make it a particularly attractive and rewarding subject of study. West Africans today still look back on the reign of the Mansa with pride, at an age when the European-made maps of Africa depicted the region with a crowned, black-skinned king, sitting on a golden throne, holding an immense gold coin, and spoke of Timbuktu in hushed and awed tones—a heritage of immense material and cultural wealth. 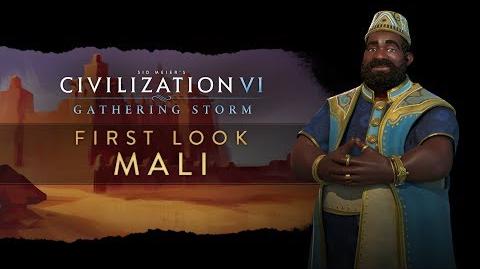 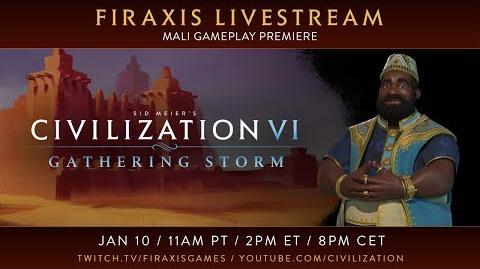 Retrieved from "https://civilization.fandom.com/wiki/Mali_(Civ6)?oldid=203364"
Community content is available under CC-BY-SA unless otherwise noted.