Arabian unique Medieval era unit that replaces the Knight. Heals at the end of every turn, even after moving or attacking.

Wikipedia has a page called:
Mamluk

The Mamluk is a unique heavy cavalry unit of the Arabian civilization in Civilization VI. It replaces the Knight.

In the Gathering Storm expansion, the Mamluk's

Gold purchasing cost is increased from 720 to 880, its

Gold maintenance cost is increased from 3 to 4, and it requires 10

In battle, thanks to its superior movement and healing ability, an army of 4-5 Mamluks can be extremely difficult to deal with since they can alternate between attacking and healing. At the end of every turn, regardless of whether the unit moves or attacks that turn or not, it will heal 10 HP. This amount applies to all circumstances, meaning even if it Fortifies Until Healed, it still only regenerates 10 HP per turn without stacking the healing effect with the action and it still heals 10 HP instead of 5 when healing inside enemy's territory. Of course, if it Fortifies Until Healed inside friendly territory or inside a City Center, since the action regenerates more HP, the healing amount from this action will supersede its innate ability.

In Gathering Storm, the overall landscape of the game has changed so much that the Mamluk seems to lose its dominance in Medieval Era warfare despite receiving no direct changes. Knights are now more expensive to build and maintain and Mamluks now also require

Iron to train, which greatly limits the Mamluk rush since Arabia does not have an incentive to build early Encampments to raise their stockpile cap. This also means that Mamluk will now need

Iron stockpiled to be able to heal with its ability (or at all, for that matter). The most important difference between the regular Knight and the Mamluk is that unlike the Knight it replaces, the Mamluk still upgrades to the Tank instead of the Cuirassier, so Arabia will have a wide gap of vulnerability when the Industrial Era rolls around. Your Mamluks cannot protect you too well in this time period as they cannot compete with Cuirassiers, their superiors, and the Industrial Era is now such a crucial time to build up your infrastructure since

Coal, Factories, Coal Power Plants and Ruhr Valley are just unlocked, which forces Arabia to invest in other unit lines as well, most likely light cavalry.

Although the term mamluk simply means “property” or “owned slave” in Arabic, most think of the military caste in medieval Islam as the only mamalik (the plural form) in history. They are certainly the most famous. Although there is disagreement among scholars, most agree that the mamluk slave-warriors arose during the reign of the Abbasid caliphs of Bagdad sometime around the 9th Century AD. These warriors were primarily of Kipchak, Circassian, Georgian, and Balkan tribes, captured or sold into slavery, and proved devoted converts to Islam, superb horsemen, and vicious adversaries. Over time the mamluks became a political power – as in Cairo where they established a sultanate – in many Muslim kingdoms, where they sometimes served as kingmakers (well, sultan-makers). So successful and influential was the mamluk caste that it survived 1000 years until wiped out by the Ottoman general Muhammad Ali Pasha in 1811. 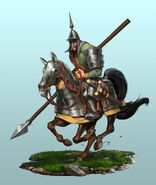 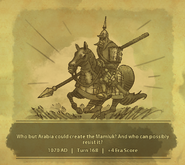 Historic Moment for building the Mamluk