Mali unique Medieval Era unit that replaces the Knight. Trader units are immune to being plundered if they are within 4 tiles of a Mandekalu Cavalry and on a land tile. Combat victories provide

Wikipedia has a page called:
Military history of the Mali Empire

The Mandekalu Cavalry is a unique heavy cavalry unit of the Malian civilization in Civilization VI: Gathering Storm. It replaces the Knight and requires 10

The Mandekalu Cavalry was a fearsome unit to face back in Civilization V - its bonus to assaulting cities, as well as its superior synergy with the Songhai's kit in general, made it dominant. Its glory days are long past, but this iteration is still quite usable in Mali's hands.

Combat Strength, making it the strongest unit of the Medieval Era. This is enough for a full-health Mandekalu Cavalry to kill a Crossbowman in two hits, provided it doesn't heal in the meantime. It will also usually take only 10 or so damage from Crossbowman fire. Considering that the Crossbowman is the premier defensive unit of the Medieval Era, this edge in a matchup is pretty significant. By itself, however, it doesn't contribute too much to Mali's offensive game. The really important factor to consider is Mali as a whole in the Medieval Era. By now, Mali will have their Sugubas up and running in most of their cities, probably making a couple hundred

Gold each turn, and may have even built the Grand Master's Chapel. With this unparalleled purchasing power, Mali can pump out a ton of units during this era, and they will have enough

Gold to maintain a large army. The problem here is if you don't beeline Stirrups, there is a chance your neighbor will have advanced Walls, which necessitates the use of Trebuchets (which, again, costs you even more

Faith investments). If Mali is terrible at producing units and has to buy them, if this domination tactic doesn't gain you any territory, you will waste a lot of

Faith that can be used for infrastructure. Therefore, if you are thinking of conquest, beeline Stirrups to maximize the window of opportunity for this unit. This is far from being Mali's most consistent strategy, but if you are looking for a change from the gameplay of Religious Victory it can be an enjoyable change of pace.

Gold from kills, which is the theme of Mali as a civilization. The problem here is that it replaces the Knight, so it will not come into play until the late Medieval Era. By this time, Mali's economy must be already solidified such that a few

Gold from kills most likely does not matter too much. Of course, you can still gain

Gold from killing Barbarians, but in the Medieval Era, Barbarians are not as rampant, killing them to earn

Gold is like adding an extra drop into the ocean. When you consider the fact that you most likely have to buy this unit, earning

Gold on kills helps you recoup parts of its original cost. A Mandekalu Cavalry can be bought with 704

Gold with the Suguba, meaning one unit can kill 14 Knights and still cannot totally recoup the cost. If the

Gold earned by the Mandekalu Cavalry actually contributes a significant percentage of your treasury, you are probably not playing this civilization to its fullest potential. The ability to protect Traders is clunky and impractical at best, because you will never be able to move your unit around to follow

Trade Route, especially with the number of

Trade Route that Mali has.

All in all, what you have on your hand is a slightly stronger Knight which can you field en masse in an instant thanks to your generous treasury. If you want to wage a war, make sure you purchase enough of them. Also, don't expect you will be able to farm

Gold with it, there is no amount of killing can recoup the cost you invested in the first place. After the April 2021 Update, the Mandekalu Cavalry is a decent unit thanks to its outstanding

Combat Strength compared to other units of the same era, but quite plain, since the abilities that set it apart from the basic Knight are meaningless.

Mandekalu cavalrymen were the elite of Malinese society, as horses were a rare and expensive commodity south of the Sahara. The Mandekalu cavalryman was armed with lance and sword, and was equipped with mail and an iron helmet. This need for armor and weapons created a cultural alliance between skilled Malian blacksmiths (working iron was a rare art, kept secret) and the nobility who used the weapons and armor in battle.

Mansa Sundiata is generally credited with organizing the cavalry into their own branch of the army. In the Sahel—the arid grasslands south of the Sahara—the mobility and shock power of the cavalry made them a fearful enemy, and they were key to the Malian military expansion. As the weather got warmer and wetter during the 15th and 16th century, the tsetse fly ranged farther, spreading diseases among horses and riders, and generally reducing the effectiveness of the Mandekalu. At the same time, declining woodlands reduced the supplies of wood for charcoal, making the traditional iron weapons more expensive to manufacture. 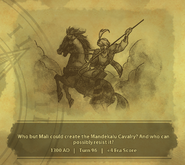