Emperor of Mali
Mansa of Mali

Gold for every flat Desert tile in the sending city. Entering a Golden Age permanently grants +1

Leader agenda - Lord of the Mines

Tries to build up

Gold, and likes those that also focus on

Gold. Dislikes civilizations with a weak


"All that you give out of charity, seeking God's countenance, will be blessed by him."

Wikipedia has a page called:
Musa I of Mali

Musa I (c. 1280 – 1337), better known as Mansa Musa, was the tenth mansa of the Mali Empire, and is widely considered to have been the wealthiest person in known history (his wealth was estimated in 2016 to be around $400 billion when adjusted for inflation). He leads the Malians in Civilization VI: Gathering Storm.

The wealth of Mansa Musa will flow through his cities creating a mighty desert empire.

Mansa Musa, great king of Mali, you are blessed with wealth beyond comprehension, yet you remain uncorrupted. Raise your eyes from the marketplace to the heavens and satisfy your heart's great yearning for peace. Protect the prosperity of your people, and history will write your name in golden letters.

Mansa Musa's unique agenda is Lord of the Mines. He tries to collect as much

Gold as possible and dislikes leaders whose

His leader ability is Sahel Merchants. His international

Gold for every flat Desert tile in the origin city, and his

Trade Route capacity permanently increases by 1 each time he enters a Golden Age.

Mali has a large gold focus. This combined with their ability to make purchases easier will allow them to quickly develop their cities. They also have large bonuses for being in the desert, allowing them to prosper in land that is usually left undeveloped.

Accepts Delegation from Player: Though I want for nothing, the sincerity of your gift is its own blessing. I will accept your delegation.

Accepts Player's Declaration of Friendship: I am pleased that you should call me "friend," for I consider you a friend of mine.

Rejects Player's Declaration of Friendship: Your enthusiasm exceeds the reality of our situation. I cannot yet call you a friend of Mali.

Requests Declaration of Friendship: Do we not gain much from our bond? Shall we tell the world we stand as friends?

Player Rejects Declaration of Friendship: It cannot be so.

Denounced by Player: Serpent! Tempter! Wretch! Look to the hour of your chastisement, for it is coming soon!

Denounces Player: O God, why do you permit this dark-hearted one wield the power of kings? Bring down your wrath, O heaven!

Invitation to Capital: Shall we fill the empty places on our maps with the locations of our mutual capitals?

Invitation to City: Please, come visit the capital of Mali! It is a place of great learning—and profit, too.

Mansa Musa was the descendant of the founder of the Empire of Mali, and a man whose personal wealth and piety still serve as worthy exemplars for emulation six centuries after his death. He is still believed to be the wealthiest person who ever lived. He nonetheless remained uncorrupted by money, using it as a tool to bring scholars and artists back to Mali to enrich his empire. The ancient city of Timbuktu in particular is associated with him, and its reputation as a center for trade and learning was a result of his efforts.

He was grandson of the Malian Empire's founder, Sundiata, and ascended to the throne around 1307. Little information about his reign has been found in western sources, until in 1324 when he undertook the Hajj—the pilgrimage to Mecca that devout Muslims undertake. However, Mansa Musa was no simple pilgrim.

His entourage is said to have consisted of 60,000 men, including 12,000 richly-dressed slaves. 500 slaves each carrying bags of gold dust or golden staves preceded him, with an additional train of gold-laden camels bringing up the rear. It is said that each night, when the caravan stopped, the pious Mansa Musa paid to have a mosque erected on the site. When the caravan arrived in Cairo, Musa produced a veritable rain of gold upon the city. Chroniclers and historians ran out of superlatives to describe his generosity. The economy of one of the world's greatest trading cities literally collapsed under a flood of gold. A historian stopping in Cairo 12 years after his visit found the locals still singing his praises, and the economy still recovering from the massive influx of gold—no mean feat, given that Cairo had borne witness to the rise and fall of countless rulers over the millennia, and the generally-world-weary chroniclers were not readily given to rhapsodies of praise.

During his Hajj, Musa recruited many Islamic scholars, scientists, and jurists from throughout the Islamic world, with the intention of resettling them in his empire to bring the latest learning to his subjects. During his absence, his general, Sagamandir, completed the conquest of the neighboring Songhai kingdom, adding the rich cities of Goa and Timbuktu to the Malian Empire. Mansa Musa returned home by touring his new conquests.

Timbuktu received imperial munificence. The Grenadan poet and architect Abu Ishaq al-Sahili was commissioned to construct new mosques (the Djinguereber mosque is maybe the most famous) and oversee an expansion of the University of Sankore. The distinctive earthen construction of these buildings is still renowned and iconic throughout the world. Sankore housed the largest collection of books in Africa—approximately a half million works—since the Library of Alexandria.

The exact dates of his death are uncertain, but most western sources give the year as 1332. He was succeeded by his son, Maghan Keita I. Mansa Musa left Mali a larger empire than he had received. Malian traders now ranged as far as Cairo, and students flocked to Timbuktu from across Africa. By all accounts, his personal behavior had been proper and moral (he nearly provoked a diplomatic incident by ignoring the sultan of Cairo in lieu of attending to his religious practices during the Hajj). He had raised Mali's profile to the world, while importing learning and ideas from other lands. His immense wealth had been a tool in his hands, not a means to an end, and Mali flourished under his stewardship. 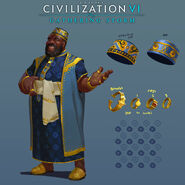