• Lydia Leaning on Her Arms

Lydia Leaning on Her Arms (

In an era when women – especially those of genteel background – were expected to devote their lives to marriage and motherhood, few could imagine a demure miss having the tenacity to achieve fame and respect through daubing paint on canvas. Born on the outskirts of Pittsburgh in 1844 AD, Mary’s early schooling prepared her to be a proper wife – classes such as homemaking, embroidery, music, sketching – but despite her father’s objections (he later declared he would rather see his daughter dead than living as a “bohemian”), she enrolled in Philadelphia’s Academy of Fine Arts at the age of 16. This was Mary Stevenson Cassatt.

In Paris she studied and painted in relative (only her relatives took any notice, and that disapproving) obscurity until 1868, when one of her portraits was selected for the prestigious Paris Salon annual exhibit. But the outbreak of the Franco-Prussian War sent Mary – reluctantly – home, where her artistic freedom was extinguished due to her dependence on her father for money. But, Cassatt was contacted by the archbishop of Pittsburgh, who commissioned her to travel to Italy to copy religious works by the painter Correggio. With the money from that, she was able to resume her career in Spain, Belgium, Italy, eventually settling again in Paris.

Cassatt’s new, experimental work drew criticism for its bright colors and unflattering accuracy, but she drew courage from Degas, whose own pastel paintings were stirring controversy. She contributed 11 of her pieces to the 1879 Impressionists show, and it was a huge success both commercially and critically. While her fellow Impressionists focused on landscapes and street scenes, she became famous for her portraits, especially of women in domestic settings with their children. But commencing in 1915, diabetes stole her eyesight, and for the next 11 years – until her death in 1926 in Le Mesnil-Théribus – Mary lived in increasing darkness. 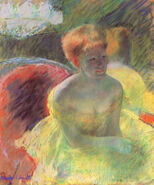 Lydia Leaning on Her Arms

The Cup of Tea