Movement when starting in open terrain.

Wikipedia has a page called:
Maryannu

The Maryannu Chariot Archer is a unique ranged cavalry unit of the Egyptian civilization in Civilization VI. It replaces the Heavy Chariot.

In the Gathering Storm expansion, the Maryannu Chariot Archer becomes an independent unique unit and no longer replaces the Heavy Chariot.

The Maryannu Chariot Archer is a very powerful early game unit. On flat terrain, its

Movement is unmatched by any standard unit of its time and equaled only by the War-Cart and the Saka Horse Archer...neither of which can compete with the Maryannu Chariot Archer's

Ranged Strength. Its drawbacks are its high

Production and maintenance costs, but a few Maryannu Chariot Archers can form the base of a strong military in the early game.

The Maryannu Chariot Archer's classification as a ranged cavalry unit means it can benefit from both the Agoge and Maneuver policy cards (and their respective upgrades), but the bonuses don't stack. In Gathering Storm, it becomes independent, so Egypt can train Heavy Chariots and doesn't have to rely on Warriors as the only frontline option to back up its Maryannu Chariot Archers in the Ancient Era. It is advisable for the Egyptians to slot Maneuver since it benefits both of the units they need.

In the expansions, the Maryannu Chariot Archer's high cost makes it a unit that the Egyptians will either train once for the +4 Era Score and then ignore, or train in numbers and then go to war to get something out of their investment. A neighboring opponent who hasn't focused on building up his or her empire's defenses will easily fall prey to a few Maryannu Chariot Archers with melee or cavalry support.

The maryannu (the singular form marya, meaning “young warrior” or “youthful hero”) was a hereditary caste of chariot-mounted nobility, found in several societies in Bronze Age Middle East. In Egypt, they rode in two-man light chariots, which offered a more stable base for archery than did horseback, given the length of the bows common at the time. And the marya could carry more ammunition. But there were some significant disadvantages for the young heroes such as the limitations of terrain and the maintenance of the vehicle and horses on long campaigns. Nonetheless, the maryannu were a powerful elite in the pharaoh’s army; the best record of their effectiveness in battle is at Kadesh, c. 1274 BC, where they carried the day for Ramesses II. There are lots of images left behind depicting the ancient Egyptian maryannu chariots (one of the indelible images of that civilization), and six well-preserved specimens were found in the tomb of Tutankhamun (who passed over around 1323 BC). 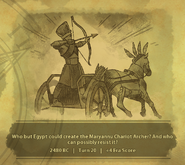