Resource allocation decisions have long been a thorny issue for humanity, but were perhaps felt most acutely in the early stages of planetary development. With pack-in resources dwindling, and the rate of resource extraction still uncomfortably slow, the early colonists adopted a highly successful and supremely centralized form of resource allocation: The Master Control.

There is obvious brilliance in letting a combination of yoked AI modules look at patterns of resource use and provide direction for optimization. Curiously, there is considerable evidence that Master Control was received coolly by many colonists, many of whom still believed in maximizing individual political autonomy in the early colony. What we know about the adoption of Master Control is largely the result of jeremiads written opposing it. What we know about the success of the Master Control system can be seen in the archaeological record: Before MC was implemented, the colonists were disorganized, squabbling, starving and sick. Afterwards, they were not.

While implemented in rudimentary technologies such as the transistor processor and binary memory architecture, the Master Control was nonetheless elegant in its operation, with tightly-bound feedback analysis from disparate inputs and a fantastically rich Bayesian associator. Recent research in computational archaeology also suggests the system masked its outputs, strategically concealing information from its operators when such would ensure a more optimal outcome. While we take for granted such efficiencies today, keep in mind that our ancestors did this with STM-able NAND gates! 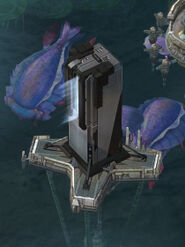