This article presents some of the mathematics of Civilization V. It was originally published by alpaca at the CivFanatics forum. Notice that this article represents the state of the game before the December 2010 patch!

Updated on 6/13/2015: Unit Maintenance updated to reflect the actual formula in the DLL - monju125

The cost of a border growth is, with t the number of tiles already claimed

The first thing we need to know when talking about anything culture-wise is how to calculate it. From the game core XML files and in-game observations, it works like this: You calculate a base cost that depends on the number of policies, then multiply with a factor that depends on your number of cities. As follows:

: The number of cities in your empire

: The base cost of policy k. Depends only on the number of policies

: The cost factor depending on the number of cities in your empire

: The total cost of policy k. Depends on both the number of cities and policies already unlocked

The policy cost has to be modified depending on your difficulty setting, game speed and map size. I took the numbers from a post by Yamian. Define these modifiers as:

rounded to the next multiple of 5

How fast do I acquire new policies?[]

This is very simple, and I'll just list it here to introduce some variable names. It depends on the culture your empire yields. With

: The total culture yield of your empire

: The cost of your next social policy (I will omit the dependencies for readability)

: The time in turns to unlock the next policy

we get the simple formula

if we assume we just unlocked a new policy. If we introduce

: The culture already accumulated in the culture bucket

How do I calculate the total culture in my empire?[]

This is shown in the UI but again to introduce some concepts. Let

: the average culture of each city in your empire

It makes sense to split c up into a part that depends on n and represents your "typical city culture", the culture each city you newly create will add to your empire, and a part that is constant in n and represents bonuses from wonders, landmarks and city states. This is exact if you immediately buy your typical culture buildings but normally it's an approximation (it represents an equilibrium you will not normally have reached)

: The typical culture per city

So for large n, the average amount of culture per city is a good measure for the policy speed.

This is the question Paeanblack and I discussed in said thread. To analyse this, we have to calculate the number of turns to the next policy and see how it's affected by going from n->n+1.

When we do the city number increase, both p and c change. Let p and c be the policy cost and culture yield before founding the new city and p' and c' be the respective numbers after the founding.

So if the base culture from city states is less than 7/3 times larger than the typical city culture (let's call this the culture ratio r_c), you will get an increased policy speed from expanding. If it's exactly equal to this, the speed will stay the same, and if it's more, policy speed will slow. It should be noted that, no matter the value of r_c, for large numbers of cities the increase or decrease for founding an additional city will be very small.

For larger maps, this will be a little different.

Now we can plug in some example numbers into our calculations. I will discuss the results only for the standard map size

To sum up, expanding will in almost all cases slow down your social progress. The only cases where it will speed it up are if you either aren't interested in city states and wonders, or if you play a civ with a culture bonus. The only somewhat realistic scenario where expansion could speed up your policy gain is in my opinion if you play Songhai because you'll really want the Mud Pyramid and a Monument isn't that expensive.

I'm not sure if city state bonuses scale with the map size but if they don't, expansion increasing your policy speed is a lot more likely on larger maps, probably happening at some time if you just have a monument and a temple or are playing France. If you play Songhai, or France with temples it will even happen pretty often in fact. This is another case where the game doesn't scale well (well in the sense of preserving the same effects on gameplay as on standard size) with map size.

: The number of citizens in the city

Need to edit everything below.

What this means is that growing from size 5 to 6 costs 51 food, while growing from size 10 to 11 already costs 122 food. I would like to present a few ways of looking at this problem from different angles in the following.

This simplification assumes that each new citizen will work a tile that's worth 2 food and you therefore have a constant amount of food surplus that is put into growth. For a normal city without any bonuses, the amount of turns you need to grow is simply given by

This kind of explains why growth feels so slow once you hit the teens: The number of turns cities need to grow becomes pretty large, even with a pretty decent food surplus. A city takes about the same time to grow from size 12 to 13 as from size 1 to 5.

Here, the assumption is that each citizen will yield a certain mean amount of food. To understand what happens there better, let's define another function, the average growth cost per citizen

(In blue the exact function, in red the rounded one the game uses)

The last term is approximately n^0.8 and dominates for large n. As you can see, this function has a minimum at size 4 (about 3.75 in the continuous case) and then constantly grows a little less than linearly - but linear growth is an excellent approximation.

As you can see below, the function 0.41 n + 8.18 fits the data over this range perfectly but is much simpler (the functions agree at all integer places).

So how do you interpret this function? What it tells you is that, with a constant amount of food produced per citizen, your city will grow more quickly than before until it hits size 4, and then starts slowing down again. Or, to put it more simple, this function tells you the amount of food each citizen has to produce to let the city grow.

An alternative, but equivalent, point of view is that, if you're aiming for a constant city growth speed, each citizen has to become more efficient as your city grows, in an approximately linear function.

You should note that the amount of food generated per citizen will usually be larger for small cities due to the city square itself (especially with maritime CS).

Cities start with a center square that yields some food (this catches granary, maritime city-states and water mill food, too). So the assumption that the amount of food per citizen will stay the same isn't really completely applicable. So let's introduce a new variable, f_csq, the city square food amount.

The assumption of an average amount of food per citizen now makes sense if you leave the city square food out. So let's call the amount of food each citizen generates f_c. The total food per turn, f, is then given by

More interesting for us is the food surplus. This is given by

The amount of surplus food produced per citizen is then

To get the number of turns we need for growth, we need to combine this with the food growth cost and get

Since this function doesn't read too pretty, I'll just plop in some numbers and give you a graphical representation. Let's say f_csq = 2, which is the case if you don't have city state allies. If the city is to grow in a reasonable amount of time, f_c should be greater than 2.5, as you can see below 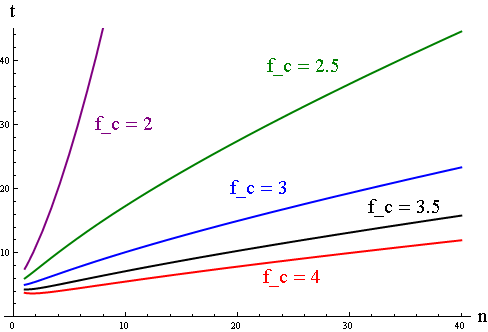 You will notice a local minimum evolving in the f_c = 4 case, which signifies the onset of the constant food per citizen approximation, which is the limiting case for f_csq = 0

Are granaries worth it?[]

Ultimately, that's for you to decide. I can give you some information so you can make an educated decision, though. Granaries increase f_csq from 2 to 4, so let's look at what happens to t if we make that change. Dashed are the values without granary, the full lines are with a granary 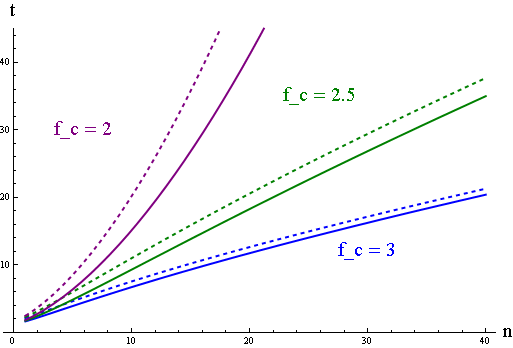 More useful to judge the granary's effects is looking at the difference between the case without a granary, and the case with a granary 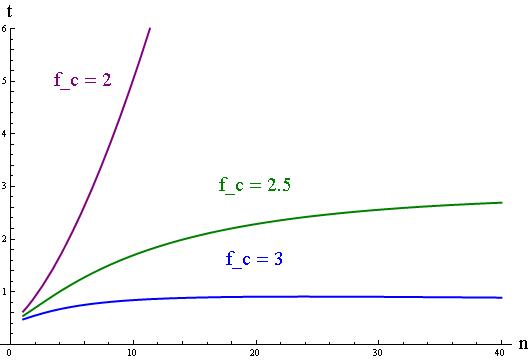 As you can see, the difference quickly becomes essentially constant at a city size of 10 or more for any case of f_c > 2. From this analysis, I'd say that for f_c values up to 3, a granary is generally worth it, because it saves you a turn or two per growth step. For f_c = 2.5 it's very much worth it, and this seems to be a more realistic case than the higher values because not every citizen will work a farm (the f_c = 4 case represents each citizen working a Civil Service/Fertilizer farm) and some won't produce any food at all, like specialists.

We can continue this analysis by increasing f_csq in steps. For example, a maritime CS will yield 2 extra food, as will a water wheel. Let's see what happens if we go from f_csq = 4 to f_csq = 6. I will omit the more unrealistically high cases from now on for a better overview. Shown is again the total number of turns needed and the difference between 4 and 6. This time, f_csq = 4 is dashed 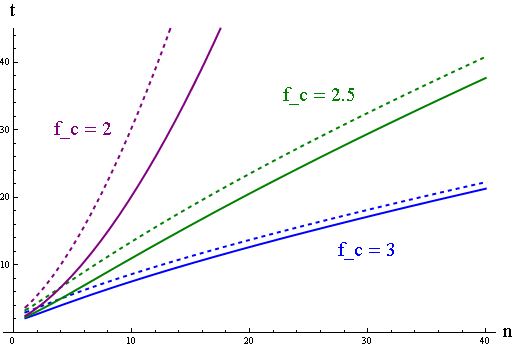 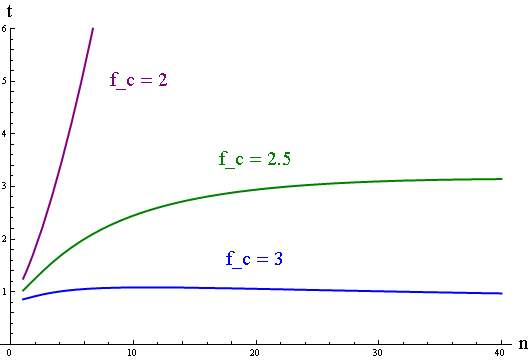 The next increase step, from 6 to 8 (the "before" being dashed as usual)

Now things start becoming somewhat underwhelming. As I said, if things are worth it for you is up to you to decide, but I'd definitely not build that water mill if I already have a granary and a city-state ally because the difference will only be something like two turns in three growth steps or so, which isn't exactly a lot.

After reading a comment from ehrgeix, I think it makes sense to extend the analysis to f_c values that are smaller than 2. The values greater than 2 are applicable if you want to let your city continue to grow for the rest of the game. Values smaller than 2 still make sense in transitionary periods, if you want a growth cap, or if you're fine with your growth speed slowing down even more than in the constant food surplus case discussed above.

Qualitatively, we can already see from looking at

, which occurs as the denominator in the formula for t, that these functions will have a pole at a finite n, because f_c - 2 becomes negative. The locus of this singularity is given by

. This singularity signifies the number of citizens where the city stops growing.

In the following are some graphs in the same way as above. First, f_csq = 2 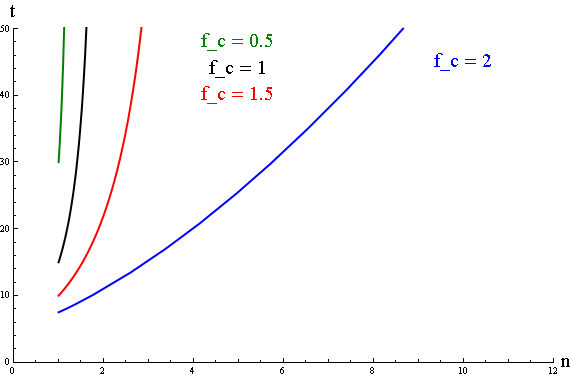 If you increase f_csq you shift the position of the pole to the right, so the difference between t(csq = 2) - t(csq = 4) has a singularity at the same points as t. See the f_csq = 4 case below. Dashed is the "previous", in this case f_csq = 2 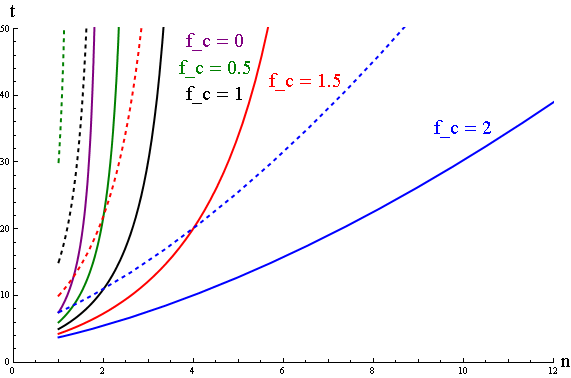 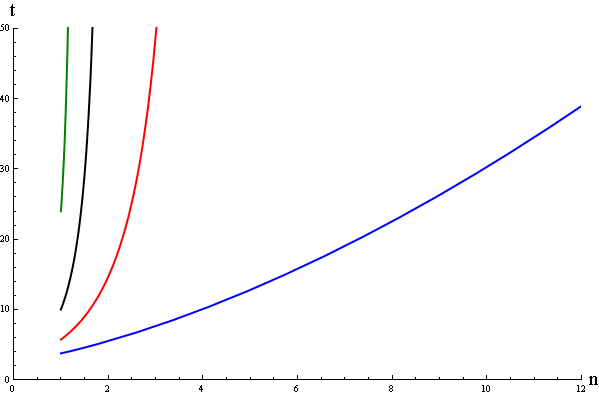 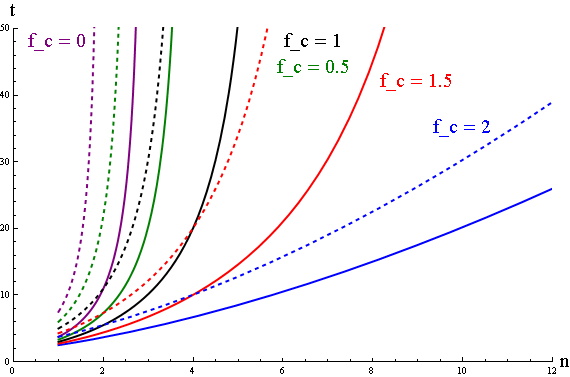 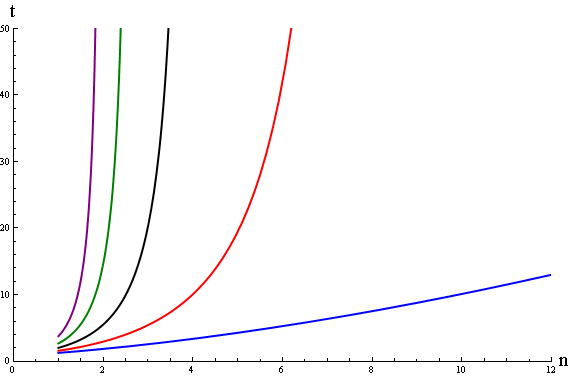 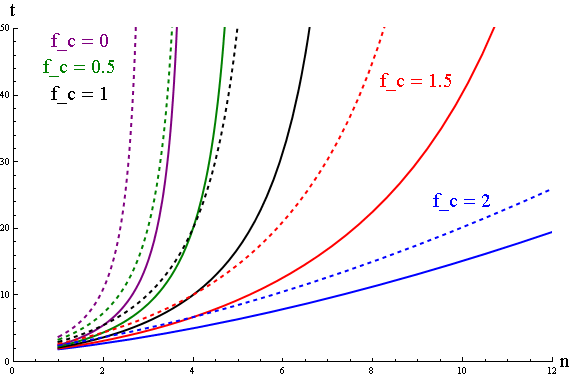 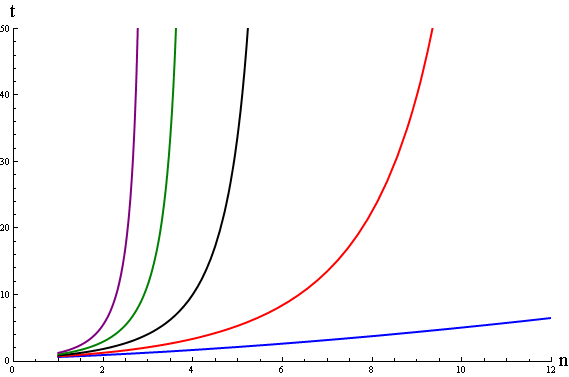 As of 6/2015, the formula for unit maintenance as defined in all versions CvGameCoreDLL is calculated as follows:

Since there's no easy "each unit in turn t will cost this much" here's a table you can use as a rough reference. The first row is the number of turns, the first column the number of units

Here's an equivalent table detailing the cost per unit