"Seven girls were chased by bears. The bears were just about to catch them when the girls jumped on a low rock. One of the girls prayed to the rock, "Rock take pity on us, rock save us!" The rock heard them and began to grow upwards, pushing the girls higher and higher."
– Kiowa Legend

Discovering Mato Tipila grants +1 Era Score, or +3 Score if the player is the first to do so.

Like other impassable wonders, the Mato Tipila wonder tile offers no benefits, and cannot be developed or improved. However, its tile provides +1

Production and 2 Appeal to up to six adjacent tiles; these yields are cumulatively worth considerably more than the dead tile. It is usually worth incorporating single-tile wonders within city borders to maximize their yields.

Faith generation means early Pantheon for whoever settles near this Natural Wonder. The

Production bonus also goes without saying that it benefits every civilization equally. Overall, Mato Tipila is a good but a very generic Natural Wonder, as it offers some good but not in any way outstanding tile yields.

The first National Monument of the United States is Mato Tipila, also known as the Devils Tower. The rocky butte reaches just over 264 meters high, and attracts geographic enthusiasts and adventurous climbers to North East Wyoming every year. A true wonder of nature, the tower's formation continues to be a point of speculation among geologists, though most believe it is an igneous intrusion formed beneath the surface and revealed as a result of erosion.

Although it is perhaps most famous for its appearance in a classic science fiction movie, legends surrounding the stony tower date back thousands of years among Native American tribes. Today, the site is still used for ceremonies including the Sun Dance and sweat lodge rites, and prayer offerings can be found throughout the trails and tied to surrounding trees, sometimes in the form or tobacco or colorful cloth.

And what of its top? Successful climbers are met with rocks, sagebrush, and small rodents, along with a breathtaking view of the surrounding landscape. 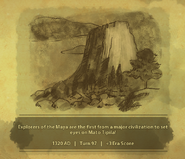