Combat Strength when fighting in hills


"Let me ask leave, then, to pay a tribute of respect and admiration to the once desired Matterhorn, before his head has lost the last rays of a sun departing to gild loftier and more distant ranges."
– F. Crauford Grove

Wikipedia has a page called:
Matterhorn

Matterhorn is a single-tile impassable Natural Wonder in Civilization VI: Rise and Fall. Matterhorn occupies a Grassland or Plains tile, and provides +1

Culture and +2 Appeal to each adjacent tile. It is considered a Mountain in-game.

Whenever a land combat unit, except Warrior Monks, moves adjacent to Matterhorn, it receives a one-time bonus. This bonus permanently raises the

Combat Strength of the unit by +3 when fighting on Hill tiles, and allows the unit to traverse hills without movement penalties.

Discovering Matterhorn grants +1 Era Score, or +3 Score if the player is the first to do so.

Like other impassable wonders, the Matterhorn tile offer no benefits, and cannot be developed or improved. However, Matterhorn provides +1

Culture to up to six adjacent tiles; these yields are cumulatively worth more than the dead tile early in the game. It is typically worth incorporating single-tile wonders within city borders to maximize their yields.

The Appeal bonus of Matterhorn is also ideal for building Neighborhoods, and is useful when founding National Parks.

The jagged precipice of the Matterhorn stands alone amongst the Alps. Its giant spire reaches nearly 15,000 feet, dominating the landscape of valleys surrounding it. As with most tall mountains, people saw the Matterhorn and decided to climb it.

Mountaineers long considered the Matterhorn a worthy opponent. One 19th Century mountaineer famously declared it unclimbable, but this claim was proven false when Edward Whymper and a party of ten other climbers began their ascent on July 14th, 1865. Though the Matterhorn claimed the lives of four companions, Whymper’s party was the first to conquer the mountain. (The mountaineer who declared it “unclimbable” was Whymper himself, who had tried and failed multiple times before.) 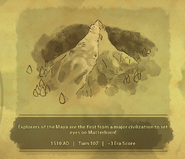