A unique district in your city that provides

Housing in Rainforest and Woods tiles.

Wikipedia has a page called:
Mbanza

The Mbanza is a unique

District of the Kongolese civilization in Civilization VI. It replaces the Neighborhood, must be built on Woods or Rainforest tiles and is unlocked with Guilds.

The following buildings can be constructed in a Mbanza:

Thanks to the Mbanza, the Kongolese can start building populous, prosperous cities as early as the Medieval Era. They also don't need to worry about searching for high-Appeal tiles as civs with Neighborhoods do - any forested area is prime real estate for them (which is good, because places with Rainforest typically have horrible Appeal).

Additionally, Mvemba a Nzinga's leader ability will cause an Apostle of the city's dominant religion (if present) to spawn when a Mbanza finishes construction. Take advantage of this to spread religions that are most beneficial as you grow your cities.

In Gathering Storm, using the Public Transport policy card allows you to gain additional yields from your Mbanzas, more so in breathtaking areas.

Mbanza is Kongolese for "city," or in some cases simply "settlement." By the time the Portuguese arrived in central Africa, M'banza Kongo was already a large city, rich from trade and craft manufacturing, but most of the population lived in the valleys that surrounded it in residential neighborhoods – perhaps as many as 100 thousand people. While these small towns might have a market and a workshop, the important things – churches, palace, schools, clinics, tax offices – were located in the hilltop capital. They were linked to M'banza Kongo by several roads up the slopes, and these were quite crowded at times such as feast and tax days. All this in 1648 AD according to the visitor Francesco da Roma. So not only did the Kongolese give civilization suburbia but also "rush hour." 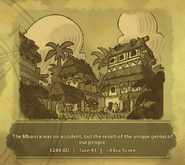 Historic Moment for building the Mbanza
Community content is available under CC-BY-SA unless otherwise noted.
Advertisement