Great Artist of the Renaissance Era

Wikipedia has a page called:
Michelangelo

Michelangelo is a Renaissance Era Great Artist in Civilization VI.

The consummate Renaissance artist, in a demonstration of Michelangelo’s unique status he was the first Western artist whose biography was published while he was still alive. In his lifetime, he was often referred to as Il Divino (“the divine one”) for his terribilita, the sense of awe-inspiring and impassioned grandeur his best works evoked.

The creator of sculptures such as the “Pietà” and “David,” of frescos such as the Sistine Chapel and 'The Crucifixion of St. Peter,' author of over 300 poems and sonnets (most dedicated to a pious widow named Vittoria Colonna), and architect of the likes of the Laurentine Library (Florence) and Porto Pia (Rome), Michelangelo di Lodovico Buonarroti Simoni was born in March 1475 AD near Arezzo, son of a provincial judicial administrator. In time, the teen was apprenticed in painting to Ghirlandaio and in sculpture to di Giobanni, both well thought of at the time. When his patron de Medici was driven from Florence in 1494, the young artist wandered away to Venice, then Bologna, and finally ended up in Rome at the age of 21.

He soon acquired several artistic commissions – mostly for cardinals (the only ones who could enjoy the “good” life). More commissions followed, including an ambitious project for the tomb of Pope Julius II; but instead of completing this, the artist was asked to turn his hand to painting the ceiling of the Sistine Chapel, not finishing it until 1512. His fame was nigh universal throughout Europe, after he was appointed the architect for St. Peter’s Basilica in 1546. There was concern that the aged artist would not live to see it completed; in point of fact, he didn’t – dying at his home in Rome in 1564. 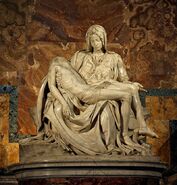