The Minas Geraes is a unique naval ranged unit of the Brazilian civilization in Civilization VI. It replaces the Battleship and is unlocked with Nationalism.

In the Gathering Storm expansion, the Minas Geraes requires 1

Coal to train and 1

Coal per turn to maintain.

The Minas Geraes is not only stronger than the Battleship it replaces, but also available a whole era earlier (that is, if you keep your civic development going strong). This gives the Brazilian player an incredible edge, if they know how to use it right!

Of course, in order to use this edge, you need a developed maritime infrastructure, able to produce enough ships to make a difference in battle. Go on the offensive and show that Brazilians know other stuff besides how to dance and have fun!

The increased anti-air capacity of these ships will allow them to easily tear into air power, and to an extent, Aircraft Carriers. However, they are still vulnerable to submarine attacks.

Intended to be the first step in Brazil becoming an international power, the Minas Geraes-class were two battleships of 11,800-tons launched in the early 20th Century. While these didn’t do much in making Brazil a power to be reckoned with, the Minas Geraes and sister ship São Paulo did start a South American naval arms race, and caused quite a stir in the United States and United Kingdom (who weren’t real keen on having battleships in South American waters that weren’t theirs). The design plans for the new class took two years to complete, and then were tossed when the new HMS Dreadnought launched in 1906 made them obsolete. Finally the keels of the new design were laid down, and in September 1908 the Minas Geraes launched, followed by the São Paulo in 1909. Their careers weren’t much to speak of – centerpieces in suppressing a naval mutiny and a couple of rebellions. And they met an ignominious end; the Minas Geraes was scrapped in 1950, and the São Paulo sank en route to the scrapyard in 1951. 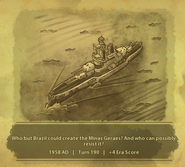