Base for launching nukes.


The Missile Silo is a standard tile improvement in Civilization VI.

In Civilization VI nuclear weapons may not be launched from cities. You must build special Missile Silos for that, or acquire one of the other special units able to launch (or drop) them.

Note that each of these devices has a maximum

Nuclear Devices and 15 for

Thermonuclear Devices), so where exactly you decide to put a Missile Silo matters quite a bit. If you put it in the middle of your empire you won't be able to hit anything important, so consider where your conflicts will force you to use weapons of mass destruction, and build a Missile Silo in your nearest city's territory.

Like everything else rocketry, the Germans pioneered the underground missile silo – building the first such complex near Saint-Omer in 1944. It was intended to store and launch V2s on England, but never entered service due to heavy Allied bombing. The British toyed with the idea of underground launch facilities in the 1950s for their missiles, and even built one, before opting for using submarines to launch their ICBMs. It was the Americans and Russians, however, who really took to the idea of planting nuclear missiles underground – as though that would help in the event of World War III. The primary purpose of the silos was to ensure the rapid launch of Soviet UR-100 or American Titan II missiles to ensure mutual destruction. Since the Cold War, the Russians have moved most of their ICBMs to submarines, the Americans have about 450 silos still in operation, and China has built a few silos but still favors mobile ICBM launchers. 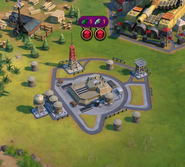