Food if on a different continent than your

Science for every adjacent Campus and Holy Site district
+2

The Mission is a unique tile improvement of the Spanish civilization in Civilization VI.

The Mission is also another underrated piece in the Spanish arsenal, considering its potential

The base yield of a Mission is 2

Faith, quite mediocre, but if it is built on a foreign continent, this goes up to 4

Production, more than twice as much. The extra

Production may sound minor, but they are decent compensations for Farms and Mines, This is what makes this improvement superior to a lot of other "spam-able" improvements (like Kurgan, or Sphinx), since it doesn't completely stunt the growth and productivity of the city if you want to focus on one type of yield and go completely overboard with it. For this reason, Spain urgently needs to discover another continent before Medieval Era hits, to ensure the maximum potential of this improvement when it is available for use. Also, cities on a foreign continent will receive 2 Loyalty if they have a Mission next to the City Center. The amount of Loyalty provided isn't huge and on its own cannot prevent colonies from revolting, but it is something to prolong the period of peace, giving you more time to act on the matter.

On top of that, the Mission grants 1

Science for each adjacent Campus or Holy Site, regardless of the continent it is on. This is what fuels the Spanish

Science game, since the sheer amount of

Science generated by this improvement can tiptoe on the "absurd" territory. 1

District may not sound as much, but that doesn't take into account that this improvement virtually has no special placement restriction, beside common restrictions that every improvement has (it cannot be built on Floodplains or Volcanic Soil, for example). It can be built on all terrain types, including Desert and Tundra, which allows great potential for a Desert Petra city or a Tundra St. Basil's Cathedral city (incredibly powerful if that city is on a different continent, since in that case each Mission provides 4

Production for these barren terrains). Missions can be built next to one another, meaning you can build Holy Site and Campus in every city one tile away from one another, and then completely surround those two

District with Missions. But the fun doesn't stop there. With Cultural Heritage, each Mission earns 2 additional

Science, effectively doubling or tripling the amount of

Science every Mission has if they are built next to a Holy Site and/or a Campus! The major strength of this improvement lies in its ubiquity, so make sure you put it down everywhere, especially to surround Campuses and Holy Sites or when the city is on a foreign continent. This is also the reason why Choral Music is the number one Follow belief choice for Spain. Spain most likely will lag behind in

Culture since their focus will be on trade,

Science, but they do have crucial civic benchmarks they need to hit, such as Mercenaries or Cultural Heritage, and Choral Music grants

The April 2021 Update made this improvement even more powerful by moving its prerequisites from Exploration to Education. Not only that is one whole era earlier, Education is a technology while Exploration is a civic, meaning now Spain will have a much easier time unlocking their

According to the Catholic Church, missions are religious communities devoted to teaching, tending, and helping the local populace, thus supporting Christ’s ideals. Of course, the Spanish, Portuguese and French missions were also devoted to converting the locals and then “civilizing” them through cultural assimilation. The Spanish missions serve as the traditional template, self-supporting enclaves with churches, dormitories, fields and pastures, gardens, barns, workrooms, hospitals and schools. In places these were even fortified, ready to defend themselves from opposition. Most of the missions in the Americas, Asia, and Africa were administered by religious orders such as the Franciscans, Jesuits, Dominicans, and Augustinians rather than the Church itself, but the effects were the same. Nonetheless, the missions often served as a nucleus around which European colonizing efforts could coalesce. 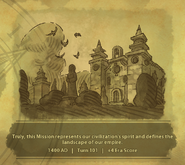 Historic Moment for building the Mission
Community content is available under CC-BY-SA unless otherwise noted.
Advertisement