Moksha, otherwise known as The Cardinal, is one of the Governors introduced in Civilization VI: Rise and Fall. He is in charge of religious activities, including defending and spreading his empire's religion and constructing religious infrastructure.

Spiritual and Religious leader that can increase the

Religious Strength of a city, and the Religious units stationed there. Moksha is a beacon of

Faith in your empire.

While Moksha is a purely Religious-focused Governor, some of his bonuses can be useful for a Domination game, particularly "Laying on of Hands" and "Citadel of God". Overall though, even if you are trying to win a Religious Victory, he is not particularly powerful though the Gathering Storm version of Moksha is much more useful.

Divine Architect is one of his better promotions, although the fact that worship buildings can be bought with

Faith somewhat makes this promotion less desirable. As of Gathering Storm, this promotion is much more useful in being able to instantly build a district.

Grand Inquisitor only buffs your units within the tiles of your city, although this can be useful if you intentionally let the city Moksha is established in fall to another religion so that you have the chance to declare Holy Wars, then crush the enemy religious units with an army of Apostles, allowing Moksha's starting title, Bishop, which increases religious pressure by 100%, to shine.

Citadel of God is quite useful if you are trying to win a Culture Victory: pick Reliquaries as a Follower Belief and Monastic Isolation as an Enhancer Belief the second you get your Religion. Make every attempt to build the Mont St. Michel wonder, as most other civilizations won't be trying to build it unless they too are also trying to win a Religious/Cultural Victory, or if you are lucky enough to be the Suzerain of Yerevan, choose the Martyr promotion for your Apostles every time. Then, simply purchase Apostles only and send them off to other civilizations without trying to convert any cities. They will be killed by enemy Religious units and you will have a great amount of Relics granting even more

Laying On Of Hands can make one of your cities a Religious wall. With a standing army of Apostles, the city Moksha is established in will almost never fall due to the healing effect. If the enemy religion does not have Monastic Isolation as an Enhancer Belief, their closest cities will be sure to fall to your Religion from their units continually dying. In Gathering Storm, any of your units will heal allowing for an even stronger defense for a front line city.

Patron Saint is the only promotion that really affects how powerful your Religious units can be, giving your Apostles a second chance at a powerful offensive promotion such as Debater, Proselytizer, Translator or Orator.

A Cardinal is one of the highest ranks of priest in the Roman Catholic Church, although similar ecclesiastical ranks exist in many other religions, such as certain Metropolitans of Orthodox Churches or the Lama in Vajrayana Buddhism. The office may entail oversight of large portions of property or large groups responsible for important aspects of the faith. 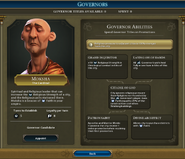