Edit
watch 04:03
Wiki Targeted (Games)
Do you like this video?
Play Sound

Combat Strength when fighting City-State units or attacking a City-State itself.

The Mongolian people (or Mongols) represent a DLC civilization for Civilization V that was released in October 2010.

The Mongolians are the masters of cavalry. Their mounted units move faster than any others, and come the Keshiks, they become one of the most dangerous mobile mounted forces in the game - not only covering great distances very fast, but also capable of delivering serious damage from afar without themselves sustaining any! Coupled with their Khans, they are also able to heal much faster than others, in addition to earning promotions and Great Generals faster. By mixing Keshiks with a good line of Longswordsmen or Musketmen, the Mongolians create an attacking force which can overwhelm almost anything on the field and decimate city defenses! This naturally makes them perfect for a domination victory.

Their other focus is city-state combat. The Mongolians receive a general combat bonus against city-state units and the cities themselves, making it really easy to capture city-states throughout the game. Use this advantage to expand your empire without settling new cities, but be careful - if you attack too many city-states, the rest might band together and declare Permanent War on you, depriving you of valuable aid in the game. Try to balance your conquests with diplomacy and gaining trust.

As with other civilizations with special mounted ranged units, the Mongolian player has to decide which promotions to focus on getting for his or her mounted units. Note that while they are considered ranged they will receive ranged promotions, but these will become useless later when they upgrade to Cavalry and become melee units! So, you need to decide whether to focus all experience progress towards achieving great ranged strength, which will benefit you until certain time but will waste promotions for later stages of the game; or to take some "neutral" promotions (such as Cover) which will remain useful later, but generally mean less offensive strength now.

The Mongolian Empire formed the largest contiguous empire in the history of the world, stretching from the Danube to the Sea of Japan and from Siberia to Cambodia - roughly 22% of the Earth's land area. From humble beginnings as a mish-mash of unaligned nomadic tribes, the Mongols changed the face of the ancient world and became one of the most feared and effective military forces ever to walk the land.

Spreading across eastern Asia, Mongolia's geography is rugged and varied, with steep mountain ranges in the north and west, verdant steppes throughout the central part of the country, and the Gobi Desert bordering on the south. While the steppes could serve as bountiful pasture land, Mongolia's harsh climate dictates otherwise. Summers are short and hot, while the long, frigid winters cover the country in devastating blizzards (known as zud), making grazing all but impossible for large parts of the year. Temperatures as low as -30 C (-22 F) during the winter are not uncommon.

From at least Paleolithic times, nomadic tribes have dominated the Mongolian landscape. These tribes were adept farmers as well as huntsmen, only staying on the move to keep ahead of the harsh winters and dry summers. They were skilled horsemen and archers, particularly accomplished in mounted combat. Occasionally, some individual tribes formed confederations, such as the Xiongnu alliance in 209 BC. While threatening enough en masse to force the Qin Dynasty to construct the Great Wall of China, these loose bandings of tribes did not have any lasting power. For the next several centuries many tribes would attempt to join together, but these short-lived alliances would usually fall apart through internal strife and bickering over yurts, horses, women, and grazing rights.

During one particularly chaotic episode, the young son of a Mongol chieftain by the name of Temujin defeated a particularly nasty tribe of Merkits. Impressed with the victory and his control over the army (he forbade looting and raping, pretty much unheard of at the time), a gathering of chieftains gave him the title "Khan" and the control of the tribe.

His uncles and cousins however weren't exactly pleased with the throne passing to the young man, and attempted to wrest control of the tribe from him by force. However, in a brilliant military campaign lasting from 1203 - 1205 AD, Temujin not only destroyed his family rivals but also brought all the remaining tribes under his sway. Never before had one man managed to gain allegiance from all the tribes of Mongols. In 1206, he assumed the title "Genghis Khan", the Universal Ruler. With this monumental event, the Mongolian Empire was officially born.

Life in the Mongolian Empire[]

Genghis is primarily well known for his military prowess and conquests, but he only maintained hold of his empire through strict civil discipline and order. He created a code of laws called the Yassa, which governed everyone in the Empire, nobleman and commoner alike. The Yassa imposed harsh penalties on anyone caught not obeying the law (usually death), religious freedom was guaranteed to any and all, all forms of vandalizing was forbidden, and government officials were selected based on merit - not blood. Despite its huge size and disparate groupings of people, the Mongolian Empire was incredibly well-run and one of the safest places on earth, if you followed the rules. Cities caught not following the Khan's decrees were systematically and completely destroyed.

Extensive trade routes were set up stretching the length of the empire, allowing safe passage from Europe to China. An efficient mail system called the Yam was also instituted - its structure would later be copied by the US's Pony Express. Roads were built, fair taxes levied, and written language was taught to the Empire's citizens. Life was surprisingly good, provided you obeyed the Khanate.

With such an efficient system of government in place, combined with the powerful Mongolian horse archers, country after country fell under the Mongol banner. At the time of Genghis' death in 1227, the Mongolian Empire already stretched from the Pacific to the Caspian Sea - twice the size of even the Roman Empire at its height. His successors continued to subjugate neighboring nations for the next four decades.

By 1258 the Mongolian armies had captured Baghdad, killing the caliph after refusal to submit peacefully, thereby opening the door to Syria and the rest of Europe. Some small expeditions were sent as far west as Ukraine and Poland, but the bulk of the army did not pass through Syria. Treaties and letters were sent to the Khan by many of the European nations, hoping for peaceful alliances rather than subjugation.

Civil War and the End of an Era[]

The Mongol's unstoppable expansions may have continued all the way to the Atlantic, but a death in the reigning Khan's family forced the western general and Kublai Khan's son, Hulegu, to withdraw back to Iran. Syria and the new western territories were quickly lost.

Hulegu and his cousin Berke (an eastern general) then began fighting in earnest over suspicious deaths in each other's retainers, dividing the internal armies and territories over the dispute. Kublai quickly quashed the internal uprisings and sent the armies back to outward expansion and conquest. However, the solidarity of the Mongolian army and government was weakened, and the foundation for the fall of the Empire was laid.

Many internal struggles and squabbles between the Khan's family and its generals ensued for the next hundred years, weakening the empire even further. With the death of the current Khan in 1335, Persia quickly fell to anarchy. The onset of the Black Death at this time also killed most of the government officials, cut off commercial ties with the empire's allies, and killed millions of the populace. Needless to say, chaos erupted.

Quickly, the western provinces fell, followed by the loss of China in 1368. The remaining Mongols quickly fled back to their original homeland of Mongolia, breaking into smaller tribes and hordes once again. In thirty short years, the empire that once ruled the world was reduced to rubble.

For the next three centuries the Mongols slowly dwindled in power and mostly returned to their tribal ways, with the last Khan dying in 1634. In 1691 the area which encompasses Mongolia today was brought under Chinese rule, where it remained until 1911. Over this time, the nobility's irresponsibility towards their subjects combined with China's unscrupulous taxation practices resulted in rampant poverty throughout the region.

With the fall of the Chinese Qing Dynasty in 1911, Mongolia declared its independence, but to little lasting avail. In 1919 it was recaptured by Xu Shuzheng. However, the Russians came to Mongolia's aid and defeated the occupying Chinese three years later. In 1924 and guided by the USSR, the Mongolian People's Republic was born.

Life under communist rule was rough. All livestock became owned by the government, Buddhist monasteries and Karakorum were destroyed and their monks slaughtered. Constant wars fought along and inside the country's borders led to much strife for the populace. Poverty became an even worse problem.

The Present and Future[]

In 1992, influenced by Mikhail Gorbachev's perestroika campaign in the USSR, Mongolia saw a peaceful democratic revolution, introducing a multi-party system and capitalistic economy in the process. A new constitution was approved and the country was renamed to "Mongolia". The first few years were rocky, but the country has since become an important industrial economy, thanks to its rich mining resources. While still young, Mongolia has formed many positive alliances with world leaders, including Japan, the United States, and China, and is working towards a brighter and more affluent way of life for its people.

The Mongolian Empire's mail system (called the Yam) formed the basis for the famed Pony Express.

Europe's knowledge of Asia was largely due to the trade routes maintained by the Mongolian Empire. 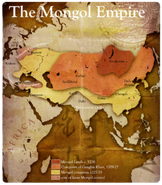