Leader bonus - Gifts for the Tlatoani

Combat Strength for all units for each different improved Luxury resource in Aztec territory.


"The sun is not hot when it has risen; after it has been travelling its course a while, then it becomes hot."

Wikipedia has a page called:
Moctezuma I

Montezuma I (c. 1398 AD – 1469 AD) was the fifth king of Tenochtitlan and the second Aztec emperor, who greatly expanded Aztec territory and consolidated Tenochtitlan's supremacy as the dominant partner over Texcoco and Tlacopan in the Aztec Triple Alliance. He leads the Aztecs in Civilization VI.

Montezuma is an aggressive expansionist who pushes out his empire in order to collect all the Luxuries he can.

Tlatoani Montezuma, keep your eagle warriors happy and fed, and they will forever fight for your cause. As your Aztec empire unfurls across the land, you will never want for people to raise your walls, for you will be blessed with new, loyal workers as you conquer those around you. Go forth; Huitzilopochtli calls.

Montezuma's leader ability is Gifts for the Tlatoani. It causes luxury resources in Aztec territory to give an

Toys) count toward this leader ability, but luxuries from trading or city-states (i.e.,

The Aztecs will be a warmonger throughout the game, but they should have plenty of

Amenities to handle any war weariness that develops. Their initial push will be to defeat enemies with their Eagle Warriors, allowing those enemy units to morph into Aztec Builders. These Builders then serve as fuel for a rapid expansion of Aztec cities, utilizing their unique ability to use Builder charges on

District construction. Ultimately they want as wide an empire as possible since any extra Luxuries they can capture will increase their

Montezuma is voiced by Irwin Daayán Rosenthal Sarli. He speaks Classical Nahuatl, but the language is both poorly translated and poorly pronounced.

Invitation to City: It is an honor to meet you. I invite you to our nearby city, you could test your skill at Ollamaliztli.

Player Accepts Invitation: It is settled.

Invitation to Capital: Tenochtitlan is closest to Huitzilopochtli; now, tell me of your capital!

Rejects Player's Declaration of Friendship: You are no friend to the Aztecatl. You must earn this honor.

Accepts Player's Declaration of Friendship: My heart turns white with your offer. Let us celebrate our friendship.

Requests a Declaration of Friendship: Let us be joined in friendship against the evils of this world.

Player Accepts His Declaration of Friendship: Thank you.

Player Rejects His Declaration of Friendship: You test my patience...

Denounced by Player: Those who are afraid speak loudest. You fear us.

Denounces Player: You are a poison to this world. You are evil!

Accepts Delegation from Player: We will house your delegation in a place of honor. Your gifts are a kind tribute.

Rejects Delegation from Player: Not today.

Sends Delegation to Player: Gifts of maize and chocolate are brought to you by my delegation. We offer them to you.

Too Many Troops near His Border: You cannot surprise the Empire. We see your attack. We will strike first if you do not move them away.

Motecuhzoma Ilhuicamina (a mouthful in any language) was the fifth tlatoani (“emperor elect”) of the Aztecs. During his 29-year reign, he made his city of Tenochtitlan the dominant power in the region, through maintaining the favorable alliance with nearby Tlacopan and Texcoco. Together, the three would proceed to beat up on all their neighbors – in no particular order: the Huastecs, the Totonacs, the Mixtecs, the Cosamaloapans, the Orizabas and the Cotaxtlas. By the terms of the triple alliance, Tenochtitlan received 40% or so of the conquered lands; by the end of Montezuma’s life, the Aztec empire had expanded well beyond the Valley of Mexico all the way to the Gulf Coast.

Montezuma (whose name means, somewhat, “he frowns like a lord”) came from good stock. His father Huitzilihuitl was the king of Tenochtitlan, and his mother Miahuaxihuitl was the daughter of the ruler of the city of Cuauhnahuac. He was one of four brothers, including his elder Tlacaelel I. Following his father’s death in 1417 AD, Montezuma’s uncle Itzcoatl was elected tlatoani; Tlacaelel I was made one of Itzcoatl’s advisors – in fact, Nahuati, or “First Advisor” – while Montezuma served as a general in the Aztec army.

Following Itzcoatl's death in 1440, Montezuma was elected emperor. Tlacaelel I did not seem at all unhappy about being bypassed (perhaps he thought he'd live longer if he didn’t wear the crown), and by all accounts he served his brother faithfully. Besides, Tlacaelel I was too busy with religious affairs. Among other things, he recast the legends of the Aztecs as a chosen people, elevated the minor deity Huitzilopochtli (god of war and the sun, and soon enough patron of Tenochtitlan), and coupled militarism to faith. Oh yeah, and he increased the scope and frequency of human sacrifice to the gods – especially during times of troubles (which seemed to be most of the time).

Montezuma, meanwhile, was living relatively modestly, despite being an emperor. He lived, according to the Codex Mendoza created just 14 years after the Spanish Conquest of the Aztecs, in a “simple” palace with “just a few wives.” In fact, it is recorded that he eventually had ten harems, three inherited from his brother Huehue Zaca. His first wife, at least in rank and prestige, was the comely Chichimecacihuatzin, his cousin and mother of perhaps three of his children, including two princes, although things are a bit hazy as to who bore which Montezuma offspring. When not engaged in religious duties or procreation or affairs of state, he supposedly enjoyed lengthy conversations with his friends and advisors.

Much of this talk seems to have been centered on how to improve the Aztec city and newly conquered lands. One of these, the construction of a double aqueduct to supply Tenochtitlan with plentiful fresh water, is considered the greatest engineering feat of the Aztec Empire. Of course as the sprawling city grew, it also required ever greater amounts of food to sustain its hungry population. Since Central America lacked domestic draft animals, every morsel had to be transported to the city on somebody's back (the burden of their many slaves – those not ritually sacrificed, that is). Montezuma’s government employed state inspectors to ensure that every scrap of arable land within walking distance was cultivated efficiently. And the emperor ordered the construction of dikes to alleviate flooding and to reclaim even more farmland from marshland.

At the urging of his brother Tlacaelel I, Montezuma instituted sumptuary laws – traditionally regulations meant to limit extravagance in consumption of goods, particularly luxuries – which codified and reinforced the already-stratified Aztec class system. An Aztec’s station in life determined what he or she could wear and how he or she could speak. For instance, under Montezuma’s new laws the poor were not allowed to wear cotton cloth, sandals or any clothing that extended below the knee. Only the nobility could live in homes of greater than one story. Crimes were punished by slavery or by being sacrificed, so adherence was nigh universal.

Montezuma and his pious elder brother set about building a lot of temples about the countryside, including a new temple to Huitzilopochtli. The temple of Huitzilopochtli was “consecrated” in 1455 AD with the sacrifice of hundreds of Huaxtec prisoners of war (it has been argued by some historians that the need for prisoners to sacrifice became one of the major threads in Aztec foreign policy). Tlacaele also got busy rewriting Aztec religious tracts, ordering the destruction of previous ones that disagreed with his own interpretations of history and faith.

But Montezuma’s growing empire is known primarily for its near constant, and successful, state of war. Some historians theorize that he conquered nearby tribes for tribute, hoping to ensure a continuous food supply for Tenochtitlan which, despite his best efforts, continued to suffer from periodic famine. Another, more pessimistic, theory is that the empire conducted frequent wars so as to feed its bloody state-religion’s chronic need for someone to sacrifice on the abundance of alters. Yet another theory is that Montezuma was at war a lot because that’s just what Aztecs did … conquer stuff. As with much of history, no one really knows why things happened.

Montezuma I died in 1469 AD, the unknown cause buried under the detritus of history. He was succeeded by his 19-year-old son Axayacatl, later father to the unfortunate Montezuma II who managed to lose everything to Cortes and a bunch of rag-tag conquistadors in just two years. 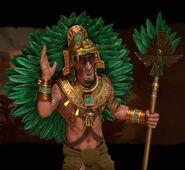 Montezuma as he appears in the Aztecs' First Look video