Religious units who move next to Mount Everest ignore Hills for the rest of the game.


"It is not the mountain we conquer but ourselves."
– Sir Edmund Hillary

Mount Everest is a three-tile impassable Natural Wonder in Civilization VI. Mount Everest appears as a Mountain, and may be found on Desert, Grassland, Plains, and Tundra tiles (often surrounded by regular mountains). Each Wonder tile provides +1

Faith and +2 Appeal to adjacent tiles.

Whenever a religious unit moves adjacent to Mount Everest, it receives a one-time "Altitude Training" bonus, permanently allowing the unit to ignore movement penalties from hills.

In Civilization VI: Rise and Fall, discovering Mount Everest grants +1 Era Score, or +3 Score if the player is the first to do so.

Faith to adjacent non-wonder tiles (see diagram). However, as with all impassable wonders, the individual wonder tiles of Mount Everest offer no benefits, and cannot be developed or improved. Mount Everest is usually most effective when it is near the outskirts of a city (or even slightly beyond its borders), since the wonder tiles themselves are functionally dead space (especially when you consider this Natural Wonder tends to spawn in a cluster of other non-workable Mountains), and their yields are not that impressive after you found your Pantheon, either. If a city is strategically placed in this fashion, it receives the adjacency benefits of the wonder and you can easily move your religious units to Mount Everest to receive the special

Faith from 2 tiles of natural wonder, 2

Faith from those tiles being Mountains). If you are playing as Australia, that Holy Site will receive an additional 3

Faith for being on a tile with high Appeal. Considering the formation of Mount Everest, you can settle 3 cities and build 3 Holy Sites this way, and maybe pick Work Ethics belief to get those cities off to a good start!

Note that the wonder tiles can be incorporated into National Parks - if a player wishes to found a Park, then it may be more efficient to place the city nearer the wonder.

Mount Everest - called in Tibetan "holy mother," or Qomolangma, is the world’s tallest mountain, standing 8848 meters (29029 feet) above sea level, and part of the Himalaya range. It is one of the “hidden valleys of refuge” designated by the 9th Century Buddhist savant Padmasambhava, and killer of over 250 would-be conquerors since 1922. In 1802 AD, the British launched the Great Trigonometric Survey of India using giant theodolites to determine the highest peaks in the world. A half-century later, in 1858, the Surveyor General of India, Andrew Waugh, announced conclusively that Peak XV (that is, Everest) was the highest. And adventurers have been trying to climb it ever since... “Because it’s there.” 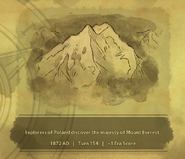