"As it turns out, Mount Kilimanjaro is not wi-fi enabled, so I had to spend two weeks in Tanzania talking to the people on my trip."
– Nancy Bonds

Food and +2 Appeal to each adjacent tile. It is considered a Mountain in-game.

In Civilization VI: Rise and Fall, discovering Mount Kilimanjaro grants +1 Era Score, or +3 Score if the player is the first to do so.

In Civilization VI: Gathering Storm, Mount Kilimanjaro is considered a Volcano. On eruption, it gives low yields and most likely damages improvements and buildings. Mount Kilimanjaro's eruptions are infrequent, but it is always active.

Food to up to six adjacent tiles; these yields are cumulatively worth considerably more than the dead tile. It is usually worth incorporating single-tile wonders within city borders to maximize their yields. Mount Kilimanjaro infrequently erupts, but is always active. As such, additional yields are likely to accumulate throughout the game. Usually, Kilimanjaro gives low yields (most likely

Production only) while causing less damage, though a Catastrophic eruption will obviously deal more yields and damage. While the Appeal bonus of Mount Kilimanjaro is useful for building Neighborhoods or National Parks, tile improvements, including the Moai, are a better usage for tiles around this wonder.

Although Mount Kilimanjaro is a Mountain, you can't build Aqueduct next to it.

In the Maasai language, Kilimanjaro is known as Ngaje Ngai, the “House of God.” Composed of three volcanic cones, the highest reaching 5,900 meters (19,340 feet) – making it the highest point in Africa and the highest free-standing mountain in the world – the Kilimanjaro massif lies in northeastern Tanzania. Considered a stratovolcano, two of its peaks (Mawenzi and Shira) are extinct, while its highest (Kibo) is dormant; its last eruption dates back approximately 150 thousand years. After multiple failed attempts, the top of Kibo was finally reached in 1889 AD by the German Hans Meyer and Austrian Ludwig Purtscheller, who confirmed that Kibo did indeed have a crater. Despite the subsequent traipsing about on it, Kibo wasn’t actually mapped until 1964, based on aerial photography done a few years earlier. 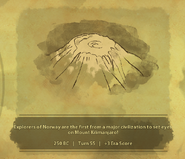