"It was a fantastic landscape, for all around were rocks of the weirdest forms standing in apparently impossible positions, some placed on or next to others, in ways that seemed to defy every law of gravity."
– Goldthwaite’s Geographical Magazine

Mount Roraima is a four-tile impassable Natural Wonder in Civilization VI: Rise and Fall. Mount Roraima appears as a Mountain, and may be found on Grasslands. Each Wonder tile provides +1

Science, and +2 Appeal to adjacent tiles.

Discovering Mount Roraima grants +1 Era Score, or +3 Score if the player is the first to do so.

Science to adjacent non-wonder tiles (see diagram). However, as with all impassable wonders, the individual wonder tiles of Mount Roraima offer no benefits, and cannot be developed or improved. Roraima is usually most effective when it is near the outskirts of a city (or even slightly beyond its borders), since the wonder tiles themselves are functionally dead space. If a city is strategically placed in this fashion, it receives the adjacency benefits of the wonder without sacrificing valuable space.

Note that Mount Roraima's tiles can be incorporated into National Parks - if a player wishes to found a Park, then it may be more efficient to place the city nearer the wonder.

Mount Roraima juts 9000 ft. above the rainforests of South America. This sandstone tabletop mountain—called “the mother of all waters” by locals—inspired the setting for a number of stories and myths. Sir Arthur Conan Doyle’s The Lost World took inspiration from the landscape, as well as the account of Sir Everard im Thurn’s expedition. Thurn, an explorer and botanist, was the first to climb Roraima successfully.

The mountain hosts a substantial amount of unique flora and fauna. Unlike Doyle’s novel, the real Mount Roraima has no dinosaurs. (If it does, they haven’t made their presence known.) 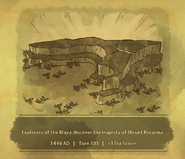