"The sea seemed to roll back upon itself, and to be driven from its banks by the convulsive motion of the earth; it is certain at least the shore was considerably enlarged, and several sea animals were left upon it. On the other side, a black and dreadful cloud, broken with rapid, zigzag flashes, revealed behind it variously shaped masses of flame..."
– Pliny the Younger

Mount Vesuvius is considered a Volcano. On eruption, it gives high yields and most likely damages improvements, buildings, districts and causes large

Population loss. Mount Vesuvius' eruptions are frequent and it is always active.

Discovering Mount Vesuvius grants +1 Era Score, or +3 Score if the player is the first to do so.

Mount Vesuvius symbolizes the direction that Gathering Storm is heading for: a gameplay of risk versus reward. Yields from each eruption of this Wonder are very high, especially beneficial in the early game, but so does the damage that comes with it. Among the three volcanic Natural Wonders, Mount Vesuvius is by far the most destructive one and also gives the highest yields per eruption. The safe distance that allows you to benefit from the yields without having to worry about massive

Population loss is 3 tiles away counting from the Wonder; however, you will not be able to utilize all 6 tiles surrounding the mountain. Therefore, you should settle within 2 tiles of it (by doing this, you can gain 3 precious Era Scores as well!) and deploy Liang with Reinforced Materials to prevent damages to your infrastructure.

If Rapa Nui also happens to be in the game, try your best to be its Suzerain, as the Moai will be invaluable when combined with Mount Vesuvius to aid you on your Civic track.

Perhaps most infamous for burying the city of Pompeii under approximately 15 feet of volcanic ash and debris in the year 79 AD, Mount Vesuvius is one of the world's most dangerous volcanoes. Though its last eruption was in 1944, the volcano continues to be closely monitored for any signs of activity that could endanger the 3 million people living nearby.

Towering over the City of Naples, this stratovolcano is a large cone surrounded by another steep semicircle – the remnants of an even older and larger volcano, Mount Somma.

As with most ancient and powerful natural sites, Vesuvius claims a long history of myth and legend. The ancient Romans associated the site with the demigod Hercules, and many believed the eruption was a sign of anger from the gods. In fact, the 79 AD eruption took place just after the festival of Vulcanalia, a celebration of the Roman fire god Vulcan. 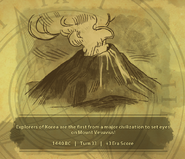