Combat Strength when within 2 tiles of a National Park, and an additional +5

Combat Strength when the park is Canadian.

The Mountie is a unique light cavalry unit of the Canadian civilization in Civilization VI: Gathering Storm.

This unit is not usable in conquest, only to defend. (The real life Mountie is a police unit, after all.) Remember to keep this fact in mind when prioritizing what promotions to give such units. Compared to a standard Cavalry, it is available later and more expensive; even then, whether or not it will do a good job on defense is not reliable until later, as your enemies can try to avoid attacking cities with National Parks.

However, the Mountie is an incredible unit that allows Canada to establish many National Parks without needing a good

Faith income. After the huge cost reduction introduced in the April 2021 Update, the Mountie becomes the much more cost efficient version of the Naturalist, even without taking into consideration the fact that it can be built with

Production instead of only purchasable with

Faith, and does not go away after using all of its

build charges. Every National Park established by the Naturalist costs 600

Faith, which is equivalent to 300

Production. Meanwhile, a Mountie has 2

build charges and costs only 290

Production, which means every National Park established by a Mountie receives a 50% discount in cost compared to the Naturalist's National Parks. It is still a good idea to slot in Lightning Warfare (which is hidden at Ideology) to aid with its

Production, as the Mountie is a standalone unit that cannot be upgraded into. Even if you do have a strong

Faith economy, you can use the thousands of

Faith you will save to buy Rock Bands, boosting your late game

Tourism on top of your National Parks.

Once all the important Medieval prerequisites are unlocked, you should go for Colonialism for Ice Hockey Rinks, then Conservation for Mounties. These Civics are on the same branch of the Civic tree. Once Conservation is unlocked, you should start building Mounties, to establish National Parks, and Builders, to create Woods which increase tile Appeal and allow you to place National Parks in new locations. It is worthwhile to look at how Appeal is calculated. It is also useful to consider where you may want parks later when settling and placing districts—regions with lots of Mountains and Woods, for example, will require much less work than thick Rainforests. Without using Builders to place Woods and Ice Hockey Rinks to increase Appeal, you will not be able to place nearly as many National Parks, and those you do place will be slightly weaker, so be sure to use them so you can take full advantage of this strong boost. For this reason, cards like Serfdom and Public Works are must-haves for much of the game. This National Park focus also goes well with the Wish You Were Here Golden Age Dedication. Placing lots of National Parks, at +3 Era Score each, helps ensure a Golden Age, and this Dedication doubles your main source of

Tourism for a massive boost.

Consider trying to build the Eiffel Tower—while its technology, Steel, is on the "awkward" side of the tech tree for cultural civilizations, it is extremely powerful for Canada. Not only does it give +8

Tourism per National Park, it will enable you to build National Parks in locations you could not before. The Eiffel Tower should be prioritized over Mounties, as Mounties cannot be upgraded into or made obsolete by Synthetic Materials, which would usually make Cavalry obsolete in favor of Helicopters, giving Canada all the time in the world to go after the top half of the tech tree (specifically the 25% empire-wide boost to

The Royal Canadian Mounted Police are a law enforcement body, not a military unit (sorry!), and were originally created to help establish the law in the Canadian frontier. Their distinctive dress uniform of Red Serge jacket, campaign hat, and Strathcona boots are universally recognized and one of the enduring images of Canada. They are courteous, disciplined, professional, and they always get their man.

In 1873, Parliament of Canada established the North-West Mounted Police, sending 150 recruits into Manitoba, including the legendary Sam Steele, who would go on to become Superintendent of the NWMP and one of Canada's greatest heroes. Wilfrid Laurier wanted to disband the growing NWMP, but the discovery of gold in the Klondike and the subsequent gold rush proved the need for law enforcement in the frontier. Eight Mounties were killed during the North-West Rebellion. King Edward VII awarded the NWMP the Royal title in 1904. In 1919, the Mounties were merged with the Dominion Police, which were an Eastern Canadian federal police force, and the organization was renamed the Royal Canadian Mounted Police.

It is difficult to conceive of the immense size of the territory that a relatively small band of Mounties would patrol. Whether shutting down illegal whiskey distilling, or negotiating with bands of First Nations, or pursuing criminals beyond the far fringes of civilization, the Mounties were often the only government presence in the frontiers. Their isolation meant that they needed to build support with the people of that land, and in this they were widely praised. The First Nations especially had a far more positive relationship with the Mounties than any US police or military force.

Today the Mounties are one of the best-equipped and flexible law enforcement units in the world. Although the last dogsled patrol ended in 1969, they still serve as the representatives of the government and the defenders of justice. And today, as since 1873, they always get their man. 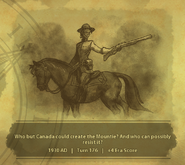